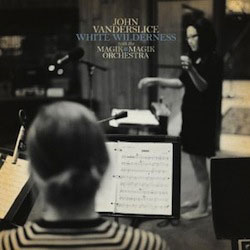 White Wilderness marks a musical departure for singer-songwriter John Vanderslice. Gone are the synths and electronic beats on which he’s long relied; in their place, Vanderslice enlists the help of Minna Choi and her Magik Magik Orchestra, who provide stunning chamber-pop arrangements that complement his songwriting beautifully without ever overpowering it.

The collaboration lends the album a sense of weight, turning what could have been a series of brief sketches into something far more complex and musically challenging. The album was recorded over three days in San Francisco, and the production is flawless; the sound field is populated with brilliant flourishes and weighty accents. Vanderslice’s vocals resemble Sufjan Stevens more than a little, but there’s nothing twee about him; like Andrew Bird he’s a deliberate and meticulous craftsman at work.

Lyrically, White Wilderness is not nearly as complex as some of the stuff on Vanderslice’s 2005 album, Pixel Revolt, but does it need to be? Vanderslice is a songwriter who’s used his music to work out complex political feelings, sure, but there’s more to it than that. In place of his usually heady approach, on White Winter Vanderslice evokes emotions that are hard to pin down, his lyrics rarely failing to call up complex and often contradictory images.

Sea Salt opens the album on a perplexing lyrical note: “Sun shines on the Gaza Strip,” Vanderslice sings, giving the indication that perhaps the album is a concept piece delving into modern Middle Eastern politics or social unrest. But the metaphor changes to a sort of woe-is-me tale of being “battered and ground down by wave after wave”. The interplay between plunking left-hand piano tones and swelling, rolling strings sets the tone for the whole album.

“You can’t take back what you put in your head,” Vanderslice sings on Convict Lake. The song vaguely tells the story of a drug trip that ends in “a hospital bed, bound down like Gulliver,” but the music is thick with horns and steeped in the pop tradition. As with most of the music here, the brass-string interplay is impeccably realised and impossibly intriguing, and the disjointed, ham-handed piano break calls up images that reinforce the mindset of the song’s narrator. It’s a study in the sublime effects of form meeting function, narrative intersecting with melody.

“You can ask anyone; I am my father’s son,” he sings over menacing horns and angular, plucked violins on the claustrophobic and menacing The Piano Lesson. After It Ends finds Vanderslice accompanied by only his heavily strummed acoustic guitar, his voice sounding contemplative and tired. “After it ends,” he sings, “I’m still hungry like I was just born.”

Overcoat is the somehow veiled story of a childhood latchkey kid turned troubled adult. During the break, the violins stab violently over a driving lower-register horn run, mimicking the song’s narrator, who “stood before her in nothing but my overcoat,” pleading for connection but unable to connect.

Alemany Gap sounds almost out of place with its nearly sunny Jimmy Buffet meets Danny Elfman lilt. “I could stay here with you under the neon-blue sky, pink clouds humming by,” Vanderslice sings over the pocket symphony; it’s not tough to imagine him picking flowers or something while singing it. English Vines and 20K are both hauntingly lovely, closing the album’s all-too-brief runtime nicely.

White Wilderness accomplishes a feat that pop music not made by Brian Wilson generally avoids: it’s at once musically challenging, undeniably engaging, and often quite mesmerising. Many of the songs here will certainly rank among Vanderslice’s best work, and the album as a whole deserves repeated listens, if only to parse out the seemingly infinite layers of nuance.