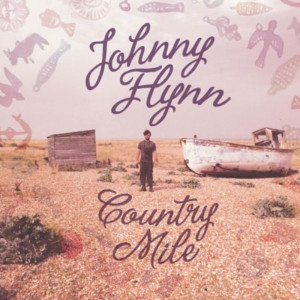 So where are they now, the so-called nu-folk acts of 2009? Mumford And Sons sold a phenomenal amount of records, quickly became critics’ favourite whipping boys and have now disappeared on an “extended hiatus”. Laura Marling became the least likely resident of Los Angeles while remaining the shyest superstar yet produced by this country,  and Jay Jay Pistolet confused everyone by reverting to his real name of Justin and forming The Vaccines.

Arguably the most interesting figure from this new wave of British folk is Johnny Flynn. As well as producing two rather fine albums with his backing band The Sussex Wit, he also has a flourishing parallel career as an actor, performing with the acclaimed all-male Shakespeare touring company Propeller, and recently being cast opposite Anne Hathaway in an upcoming Hollywood film.

So it wouldn’t have been all that surprising had Flynn decided to drop the musical career to concentrate on acting full-time, especially given the rather lukewarm reception accorded to the under-rated Been Listening. Thankfully, Flynn is a man who can multi-task and has produced an intriguing third album which moves away from his folk background and dips its toes into fully-fledged Americana.

Country Mile marks the first time that Flynn has self-produced an album, marking a break with his usual collaborator Ryan Hadlock, with most tracks being recorded as demos in both London and New York. That ‘live sound’ comes across well on record, especially on the opening title track, which begins with a raw guitar chord and ends with layers of brass piled upon it. The Lady Is Risen has a similar feel, both uplifting and introspective, while Fol-De-Rol is one of the few songs to successfully combine a South American influence with barbershop quartet backing vocals. It really shouldn’t work but, quite brilliantly, it does.

Although not strictly a concept album, there’s a common theme running through Country Mile: that of a journey. The title track talks of hitting the road (“nose to the road, and I’m painfully free”), while the final track, Time Unremembered, takes the old cliche of ‘life as a journey’ and makes something fresh from it. The latter, which has shades of The Pogues’ more traditional moments, is one of a few affecting ballads on Country Mile, with the standout track being the gorgeous Einstein’s Idea, a lullaby written for Flynn’s newborn son, which attempts to explain the theory of relativity to the infant. It’s a maverick approach to babysitting, but the hushed beauty of the melody means it works very well.

Some people may flinch at a few ‘Mumford-isms’ on display – the opening twang to Tinker’s Trail for example – and those who have grown weary of nu-folk’s new-found popularity in recent years will not find much to change their mind. However, Flynn remains one of the country’s most overlooked songwriters and Country Mile is a good reminder of his skill with a well-crafted song.