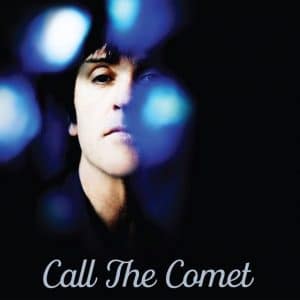 Johnny Marr took a long time to forge an independent career since the acrimonious split with The Smiths in 1987, but his third solo album Call The Comet is his best so far. After collaborating with a wide variety of musicians – forming supergroups, joining existing bands and playing as a guest guitarist – he finally released his well-crafted, if less than inspiring debut solo album The Messenger in 2003, followed the year after by the disappointing Playland. Now, aged 54, Marr has produced his most ambitious and interesting work under his own name.

Call The Comet is not quite a concept album, but it is unified by connected themes. “It’s set in the not-too-distant future and is mostly concerned with the idea of an alternative society,” according to Marr; “the characters in the songs are searching for a new idealism.” Although there are dystopian elements, it seems he’s reacting positively to our present era of intense division and turbulent uncertainty by imagining a more hopeful outcome for humanity.

Always an accomplished musician, he has developed his lyric writing, as well as working on his vocals so that he is now a more than passable singer. Compared with the maverick showman Morrissey, he is not a natural frontman, though of course he was never going to be satisfied with just being a sideman. Call The Comet has Marr’s personality stamped on it all the way through. Recorded with his band and self-produced at his Crazy Face Studios in Manchester, it’s a substantial album lasting almost an hour.

Rise is a big, bold opener with crashing drums, reverberating guitar chords and shimmering synths. In an apocalyptic “dawn of the dogs”, Marr gives a rallying cry for self-empowerment: “You’re the truth… Destiny is rising.” Lead single The Tracers continues the sci-fi imagining as the singer urges us to put our salvation in “the tracers” amidst Earth’s destruction and to “ride the comet”, with “Ooh, ooh” backing vocals and a pumping bass line driving it along. Hey Angel features a coruscating guitar solo from Marr – much more squealing than chiming – as the characters merge into the ether.

Second single Hi Hello is the closest thing here to The Smiths, a bittersweet song with trademark guitar arpeggios and a groove that echoes There Is A Light That Never Goes Out. The electro-pop New Dominions, though, as its name suggests, has a futuristic vibe with its motorik beat, like the early krautrock-influenced Simple Minds, as Marr sings: “Take the fast light to the real dream / I won’t go to no darkness after.” Opening with acoustic guitar strumming, Day In Day Out is a more traditional, catchy tune with hooks galore.

Walk Into The Sea is the most experimental offering on the album, with its high-pitched piano notes, dreamily discordant ambience and part-sung, part-spoken vocals suggesting baptism for a new life: “We are born again… And hope breaks on me.” The most danceable track Bug is a rejection of the virus of right-wing ideology: “Population is sick and shaking… Nah nah no more.”

With its dark and doomy keyboards and industrial-style drumming, Actor Attractor evokes Joy Division, as Marr exhorts, “Forever we can live to the limit / Forever we can give to the limit”. The sweeter-sounding Spiral Cities has laid-back vocals and liquid guitar playing, while My Eternal is moody, The Cure-like synth rock. The soaring melody of closing track A Different Gun – a considered response to the terrorist attack in Nice on Bastille Day 2016 – accompanies Marr’s plea for living together in peaceful normality: “And we’re taking every day that comes… Stay and come out tonight.”

Compared with some of the oddball and downright disturbing comments Morrissey has been making – both in and out of his songs – over the last few years, Marr offers a vision of a more humane, liberal future. While one Smith seems to have lost the plot, another has found his voice.