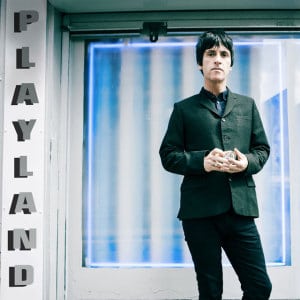 Just like waiting for a bus, it is. Over 30 years in the music business before The Smiths’ guitaring god Johnny Marr released an album, yet 18 months later another arrives. Last year’s effort – The Messenger – surprised many, and not only those that had steered clear of his band Johnny Marr And The Healers, where his adequately capable vocals first appeared in earnest.

Whilst a little uneven, The Messenger provided enough highlights to suggest Marr had been busily squirreling away songs for years, different chapters of his career coming to mind throughout the album. With Electronic, Modest Mouse and of course The Smiths all reaching varying levels of importance in history, expectation was always going to be impossibly high but, to his credit, it proved to be a decent effort nonetheless and one that grew in stature with repeated plays.

In its creation, Playland has been very much a continuation of The Messenger, writing beginning straight after the debut was released during a busy touring schedule where ideas would be developed in-between gigs and played around with on the tour bus. The underlying goal has been, again just like its predecessor, an attempt to write “good, catchy pop songs”, according to Marr.

But in direct comparison to last year’s debut, it’s apparent that the new collection isn’t quite as good. Lead single Easy Money is as intended, a catchy pop song based around a subject we can all relate to but it’s only average rather than good, the infectious guitar riff clearly the catalyst but the repetitive chorus isn’t particularly life changing. And that sadly typifies the album.

Candidate opens to guitar tones similar to The Rolling Stones’ Gimme Shelter before turning into a close cousin of Say Demesne from the first album but with less atmosphere. The more up-tempo title track borders the chaotic; perhaps too much is going on, including a rather nondescript instrumental section, while Speak Out Reach Out starts like a slowed down version of the bouncy riff from The Knack’s My Sharona before veering off down a dead end of mediocrity. The Trap starts promisingly with more top notch guitaring but the chorus fails to ignite once again.

However, there are some vital highlights: opener Back In The Box comes leaping out of the traps to start the album with a burst of energy and weaves some guitar mastery with a catchy riff alongside synths and rampant drums. Dynamo recalls The Psychedelic Furs’ Pretty In Pink and is another decent cut despite a so-so chorus but the guitaring impact this time outweighs the vocals. And 25 Hours is awash with the best guitaring across both albums: verses are spat out in similar fashion to Underworld’s Born Slippy alongside early ‘80s synths. But it’s The Smiths-like jingly guitar noodling that steals the plaudits, sounding more like what you might expect of a guitarist viewed as being one of the best of his generation, a skill that he has rather modestly kept in check over the last two years on both albums and during live performances.

Coming so soon after the debut, comparison is inevitable; ultimately, there are more tracks to keep you returning to The Messenger and, whilst that record played like an A-side of Marr’s accumulated ideas, Playland often takes on a B-side presence, sounding rushed in places. If a handful of tracks from the first album had been replaced with the best tracks here then Marr would have produced one of the best guitar albums of the last decade, but taken on their own individual merits, neither quite achieve greatness.