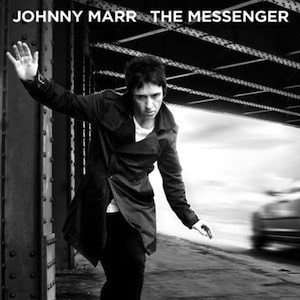 “David Cameron, stop saying that you like The Smiths. No you don’t. I forbid you to like it.” It was with that tweet back in 2010 that Johnny Marr confirmed the massive impact of The Smiths’ cultural legacy. From being the champions of the dispossessed and alienated to being namechecked by the Prime Minister – it’s been quite a journey.

It may also explain why Johnny Marr has taken over 25 years to make his first official solo album. After all, when you’ve been universally acclaimed as the greatest guitarist of your generation, and then gone on to join Electronic, Modest Mouse and The Cribs, as well as guest with seemingly every musician alive, then maybe there’s no real need to go solo. Besides, when other guitar icons such as John Squire and Bernard Butler have trodden the solo route, the results have been somewhat underwhelming.

And that’s the issue with The Messenger. When you have a back catalogue as immense as Marr’s, expectations are high and nearly impossible to meet. To be fair to him though, he’s dealt with this by making The Messenger sound like the perfect melting pot of his career to date. There are elements of all of Marr’s former bands, including – yes – The Smiths on this album: but the problem is whether Marr’s own personality is given space to shine.

The Messenger is, thankfully, better than The Healers, the band that Marr put together with Zak Starkey and Kula Shaker‘s bass player – unlike their one and only album Boomslang, there’s no sub-Oasis plodders to be found. In fact, this fair races out of the gates, with opening duo The Right Thing Right and I Want The Heartbeat sounding fresh, urgent and vital. There’s a Northern Soul stomp to the former, while the latter gives us the first real sound of Marr’s guitar work – scratchy, abrasive and exhilarating.

Marr’s voice is decent – strong if not particularly distinctive, and it’s impossible not to hear echoes of those he’s worked with in the past. There’s definitely a strong Morrissey tint to The Right Thing Right, but it’s his former colleague in Electronic, Bernard Sumner, that springs to mind the most. Indeed, European Me or the beautiful New Town Velocity could easily be lost New Order songs from their heyday.

It’s an uneven album though, and one that’s a bit too long. There are a few too many anonymous guitar rockers for its own good, with the second half of the album badly falling away after its strong start. Sun & Moon is particularly featureless, and only the atmospheric guitar work on Say Demesne saves it from being too dull and forgettable. Although Generate! Generate! has a fearsome stomp, it’s let down by some repetitive lyrics, and closing track Word Starts Attack is saved by some extraordinary guitar work, as the actual song itself is a tad forgettable.

Overall though, this is a solid, enjoyable solo debut that’s certainly worth investigation if you’re a long-term Marr watcher. If The Messenger had been the debut work from a young, up and coming singer/songwriter, it would most likely cause paroxysms of excitement in the music press. As it is, Marr’s stellar back catalogue and massive influence means that his past is likely to continue to overshadow his present.