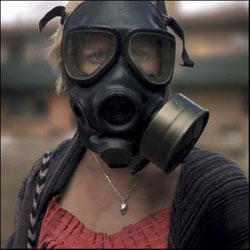 Jon Hopkins is the creator and curator of sonic witchcraft. A musician skilled enough to create melodies that evoke images in the mind’s eye is a rare thing indeed, but to fully transport a listener’s consciousness into a dark, mystical dimension of other is nothing short of genius; borderline black magic.

The audio warlock who conjures up these tangible fabrics of parallel lands brings forth his Midas touch in the score for independent low budget feature length horror Monsters. And if the film, for some, smacks somewhat of cheese, Hopkins’ soundtrack does not. Instead it draws listeners (and viewers) in as it does into an enhanced and lucid existence, opening portals into alternate worlds, stirring hearts and very souls.

Hopkins is a professional composer and electro-musician with three albums behind him, with notable production and songwriting collaborations with Brian Eno, most recently playing alongside the artist in live improvisation pieces that feature on Eno’s electro concept release Small Craft On A Milk Sea. In scoring for Monsters, he works with classical instrumentation, primarily strings, performed by arranger Davide Rossi, before adding his unique, subtle electro-twist to take the tracks up a notch. Hopkins saturates every note with suspense; every beat is a theatrical performance in itself. There’s almost a living, breathing (non-) human heartbeat in the bass behind the melodramatic melodic arcs and gravelly crunch of the stunning Monster’s Theme, and Journey, which retains both its depth and suspense, with deep pizzicato strings, and its sense of urgent beauty with touches of metallic tubular percussion and a gradual though insistent trickle into stark piano.

The realism conveyed within the sound is sometimes shocking. Candles literally glows with mystical warmth and flickering tension with back-masked melodic light effects. Campfire lends comfort in the cold with the clever use of a delicate, warm piano melody in the major key, and soon withers into a high pitched note which hangs and lingers like a wisp of smoke in the dark. In direct contrast is Attack: screaming strings give the high frequency buzz of a thousand mosquitoes, then hum with the bass of a swarm of angry bees; menacing metallic aeroplanes fly overhead, strings struck in vibrato screech like sirens to create a simply terrifying, panic inducing soundscape.

BAFTA award winning CGI animator and director of Monsters Gareth Edwards says “There’s a lot of heart in the film and much of that is because of Jon’s composing.” A score rarely evokes images so vibrant and so corporeal – the score for Monsters stands alone, drifting between beauty and terror that shifts, distorts, transports and transcends sense and emotion. “It’s just beautiful,” continues Edwards. Listeners may be inclined to agree.