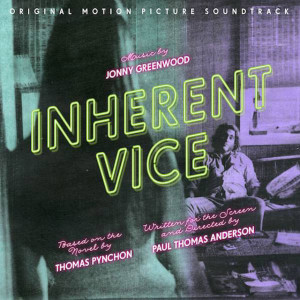 A partnership that began with the striking music for 2008’s There Will Be Blood was further enhanced by The Master – and now comes Inherent Vice, Anderson’s adaptation of the novel of the same name by Thomas Pynchon.

Despite the wildly different subject matter between the three pictures Greenwood’s compositional approach is largely consistent, opting once again in favour of a string-heavy orchestra, and resisting the temptation to make any obvious musical references to the early 1970s, when the picture itself is set.

Within this some carefully managed orchestration gives him the ability to paint vivid pictures and to change moods quickly. If anything his work here is more straightforward – and certainly a lot warmer – than in previous Greenwood soundtracks, but not less. There are also more expressive tunes, here a feature immediately evident from the yearning cor anglais melody that comes as the first number, Shasta, sets the scene. This makes a sharp tug at the heartstrings, as does the powerful high violin motif heard later on in the soundtrack, providing one of the stand-out features of the score.

Yet there is a fundamental problem in the assembly of this soundtrack, which is the jolts that occur when Greenwood’s score alternates with songs chosen to complement it. This is doubly frustrating because the songs themselves are high quality selections, including Minnie Riperton’s Les Fleurs, Vitamin C by Can and The Marketts’ Here Comes The Ho-Dads. These abrupt mood swings do not always match the atmospheric pictures Greenwood has taken time and care to paint, and when we move straight from Greenwood’s Shasta Fay into Les Fleur it is as if a giant windscreen wiper has changed the view in a single stroke. This happens again when the anxious lines of The Chryskylodon Institute, their profile taking on Philip Glass-like loops, cut to the swooning strings of Kyu Sakamoto’s Sukiyaki.

The advice, then, would be to program your listening to the Greenwood items first, making sure you include Spooks on the list. This eagerly awaited and previously unreleased Radiohead instrumental was played live by the band around the release of In Rainbows, and is given here with two-thirds of Supergrass (Gaz Coombes and Danny Goffey) and a voiceover from Joanna Newsom.

Yet this is undoubtedly Greenwood’s work, and he writes with ever-growing assurance and colour, broadening the orchestral palette. It’s just a shame this album as a whole could not be arranged in a more satisfying way.