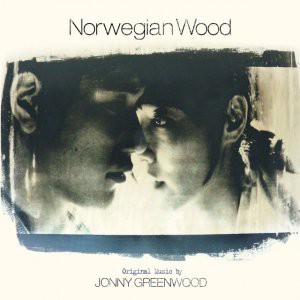 While the day job remains his role as guitarist with Radiohead, Jonny Greenwood’s reputation as an expert orchestral craftsman continues to gather strength. Many would argue the strongly evocative score to 2007’s There Will Be Blood deserved to win an Oscar for best soundtrack, though in a sense that might have set him on the wrong path and exposed him to the Disneys of this world.

As it is, his Norwegian Wood soundtrack explores further the possibilities of writing for strings. Though it has become something of a tired old format in much incidental music for the moving image, Greenwood shows how the string orchestra remains a descriptive force in the right hands. It only takes a minute of the floated introduction, Mou Sukoshi Jibun no Koto, Kichinto Shitaino, to bear this out. The upper register harmony simmers like a slowly moving mirage across a desert, moving seamlessly into a serene passage for high register violin.

Complementing Greenwood’s contributions to the score, expertly played by regular collaborators BBC Concert Orchestra under Robert Ziegler, are passages of reduced scoring from the Emperor Quartet and three songs from Can, interjecting at regular intervals. Initially these come as something of a jolt to the rounded string textures, but as it turns out the extended jams of Mary, Mary So Contrary, Bring Me Coffee Or Tea and Don’t Turn The Light On, Leave Me Alone, become the defining moments of the album.

This is in part because Greenwood’s contributions, delightfully written as they are, alter little in mood as the film progresses, the colours rarely deviating from admittedly exquisite shades of black and off-white. The exception to this is Naoko ga Shinda, a threatening cluster of notes from upper register strings suggesting that ominous things are about to happen, especially when a far off but deep drum beat is added to the mix. This is in stark contrast to the preceding Can song Bring Me Coffee Or Tea, something of a genial ramble that becomes progressively more rhythmic as it moves forward.

The gap in between his exploits on the big screen suggests Greenwood is choosing his material judiciously, and his increasingly adventurous classical compositions suggest he is very close to mastering his discipline as an orchestrator, capable of shaping his work to larger structures and shading it with ear catching detail. If he can add to this a slightly greater musical variety, he will be a formidable force indeed in a particularly crowded field.