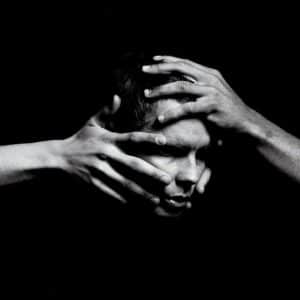 It’s hard to think of two artists seemingly more diametrically opposed than Jónsi Birgisson and A.G. Cook. In one corner, the unmistakable voice of Sigur Rós, the band who redefined words like ‘ethereal’ and ‘dreamy’ and gained a wider audience when Hoppípolla soundtracked David Attenborough’s Planet Earth TV show.

In the other, we have Cook – the founder of PC Music who specialises in chaotic, hyperactive, glitchy electronica, and who’s already had a remarkably prolific year, releasing two albums of his own – Apple just a couple of weeks ago – and producing Charli XCX‘s lockdown album How I’m Feeling Now.

The collision of Jónsi and Cook’s styles on the former’s second solo album can occasionally be grating, and any casual Sigur Rós fans may well be running for the exits when Cook really turns up the distortion. Mostly though, Shiver wisely plays to Jónsi’s strengths, and parts of this album contain music that sounds utterly, heart-stoppingly, beautiful.

Cannibal, for instance, almost takes the breath away – as you’d imagine a duet between Jónsi and Elizabeth Fraser would. Fraser, who pretty much paved the way for Sigur Rós with her work with Cocteau Twins, blends beautifully with Jónsi, and there’s an almost choral feel to their harmonies.

Another collaboration, this time with Robyn, lets the Swedish singer take centre stage, and is possibly the most pure pop moment on the album. The combination of Cook’s frantic beats, and Jónsi and Robyn teaming up on the glorious chorus, mark it out as one of the album’s highlights. As ever with Robyn’s work, it strikes that delicious balance between sadness and euphoria (“The way we used to love, it cuts me through and through” runs one line).

When Cook’s experimental side is indulged, the results can be startling. Wildeye is nothing short of astonishing, a barrage of relentless electronic noise that almost threatens to overwhelm Jónsi, until everything goes quiet and we hear him softly singing “We went too far, my straight friend”. Then, everything explodes again in a musical version of a panic attack.

Sometimes though, this meeting of minds doesn’t work quite so well. Hold would sound a lot more affecting if it wasn’t for the constant busy squall of noise behind Jónsi’s voice, while a couple of songs, such as Sumari Sem Aldrei Korn or the closing Beautiful Boy seem to just meander along rather than really catch fire. Yet when these two unlikely worlds collide, there’s always the possibility of alchemy – the gorgeous title track and the aching Grenade, towards the end of the album, being two perfect examples.

Ultimately, a whole decade after his last solo album and seven years since Sigur Rós’ most recent record, it’s just a joy to hear that unique voice once again. Shiver may be a step out of Jónsi’s comfort zone, but it’s a step that seems to have reinvigorated him. This may not be soundtracking many Attenborough documentaries, but it could introduce the Icelander to a whole new audience.