by Chris White
published: 24 May 2021 in Album Reviews
Tweet 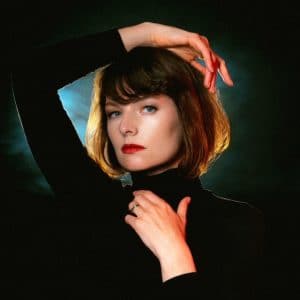 Forget Tracey Emin or the Turner Contemporary. The 21st century reinvention of the faded Kent seaside town of Margate is perhaps epitomised by the fact it’s now the home of the avant garde Australian composer/saxophonist Jorja Chalmers, whose dense, cinematic soundscapes feel like they belong on another planet to Chas and Dave’s rolicking 1982 celebration of buckets, spades and jellied eels.

A graduate of the Sydney Conservatorium of Music, Chalmers moved to London and after a period kicking around in temp jobs and underground bands, ended up playing saxophone for Bryan Ferry on several global tours. It was during her downtime in hotel rooms across Europe and North America that Jorja’s 2019 debut album Human Again began to take shape. Haunting and immersive, it established Chalmers as an artist to watch.

While much of Human Again was recorded sporadically and off the cuff, follow-up Midnight Train is a much more painstaking, fully formed record. Mixed by Dean Hurley, David Lynch‘s music engineer, it sounds impressively crisp and lush, although the mood remains as dark and unsettling as Lynch’s movies.

The world isn’t short of leftfield electro pop singer-songwriters right now, so what – if anything – sets Chalmers apart? Well, to be blunt, it isn’t the songs themselves – those looking for big, memorable choruses should look elsewhere, and it’s telling that even after a few listens, the standout track remains a starkly elegant cover of The Doors’ classic Riders On The Storm. To get the most out of Midnight Train, the listener needs to focus on absorbing the record as a whole, allowing the richness of the sonic palette Chalmers creates to be slowly digested. Although the central elements of swirling synthesisers, ethereal vocals and the Australian’s fluent, mournful saxophone change little, there are some intriguing variations.

With its restrained dynamics, opening track Bring Me Down brings to mind Bat For Lashes, or even late period Kate Bush. But Rabbit In The Headlights, with its crunching electro riffs and air of menace, is much more akin to more uncompromising artists like Planningtorock, before the harshness suddenly yields to a deliciously noir saxophone solo. Boadicea is a vast, sweeping and mysterious instrumental that recalls modern producer-composers such as Roly Porter. Love Me Tonight, with its soaring refrain of “it’s raining/it’s pouring”, is the nearest Midnight Train gets to a pure pop song. The album closes with Underwater Blood, which sounds like it could be an undiscovered Vangelis film soundtrack from the 1980s.

With influences ranging from Roxy Music, Brian Eno and Robert Wyatt to Krautrock, Michael Nyman and John Carpenter, Midnight Train is expertly constructed and texturally rich offering from Chalmers, with a tangible sense of dystopian otherness. However, it doesn’t quite grab and shake you enough to elevate hearing the record from an interesting experience to an essential one.