by Martyn Young
published: 13 May 2020 in Album Reviews
Tweet 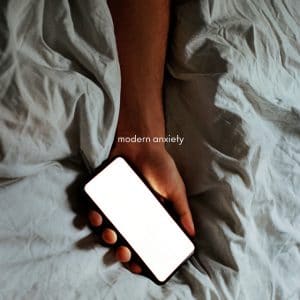 Australian singer-songwriter Josef Salvat established himself as one of pop’s more intriguing and left-field voices on his successful 2015 major label debut album Night Swim. While Salvat’s luxurious brand of pop is the sort in which you can really immerse yourself in, he has yet to entirely catch fire as a mainstream performer in the UK. That promises to change on his assured and classy follow up Modern Anxiety.

You can probably be sure you’ve heard Salvat’s music at some point floating in the cultural ether, whether it’s in TV and film syncs or from being used in adverts. On Modern Anxiety though he moves beyond earworms to a fully-fledged brand of emotionally resonant pop filled with diverse hooks and a bubbling production that keeps you on your toes.

The album is Salvat making an emotional statement and broadening his outlook as a writer and an artist, unafraid to take on big relatable themes of love, romance and deconstructing modern life with a sympathetic approach. It begins with the sound of bustling traffic, that most traditional of signifiers of a life filled with stress and a desire to get things moving. The song itself is suitably busy, with a blissful tropical beat that underpins Salvat’s rich, creamy croon as it gently traverses the undulating melody. This is not the sound of someone barging the door down but instead gently caressing and pulling back the curtain. It’s indicative of a record that prefers gentle whispers to bludgeoning shouts.

Now aged 33, Salvat has had quite a bit of experience both emotionally and musically, and there’s the feeling here that he’s long since honed his craft and has just been waiting to burst into full flight. Modern Anxiety is flecked with frequent moments of uplifting musical joy, such as the glorious climax of Melt, when the track soars into the galaxy with Salvat’s beautifully keening falsetto powering it. Elsewhere, he goes deeper and darker on the intense, fevered electro of Melt.

The production which works perfectly with Salvat’s voice, while each track has a modern, super slick sound that marks it out as an accomplished progression from his debut. Modern Anxiety very much follows Salvat’s vision in much the same way pop performers like Charlie Puth and Sam Smith have forged ahead along their own distinct path. There’s heartbreak and tragedy here, but a pleasing balance between light and shade, too. Salvat has experienced hard times and has come out the other side, rejecting the macho culture he came from growing up in Australia to thrive as an artist happy to embrace who he is. You can hear this feeling of solidarity and community on the empowering anthem No Vacancies in which he proclaims, “There’s no vacancies for freaks like me”, before exclaiming in the joyous chorus, “Trust me, there’s gonna be better days.”

While a few of the songs could do with a harder edge, that’s not Salvat’s style. What he has delivered is a record that is heartfelt and tender, direct and emotionally challenging, while still sporting enough tricks and flourishes to fill the dancefloor with bangers to spare.