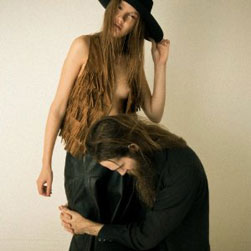 A potential solution to the oversaturation of the music business with an overwhelming quantity of new releases each week would be for all artists to invest over a decade of soul searching into every album. Even then, few would come up with something as powerful as Josh T Pearson’s long gestated solo debut.

Originally from Texas, he formed Lift To Experience who released one hugely acclaimed album in 2001 and split soon after. Since then there’s been just one split 7 inch single and some guest vocals on the Bat For Lashes album Fur And Gold until this heartbreakingly evocative near-masterwork, Last Of The Country Gentlemen. From the spectral Jeff Buckley-esque Thou Art Loosed, through haunted lines like “I’m some dying Christmas tree” on I Ain’t Your Christ to the menacing and minimal Woman When I’ve Raised Hell, the bruised introspection is relentless. The prospect of being loved by this man becomes something quite terrifying. It’s clear this isn’t an album to put on when you bring a new lover home, rather when they’ve left and you start to feel plagued with doubt.

Then things start to get really interesting with the album centrepiece Honeymoon Is Great, I Wish You Were Her. Clocking in at an audacious 13 minutes, it’s more of an orchestral movement than a song. Steeped in the agony of the mental conflict that goes on when you love someone who is not your actual partner, it’s a compelling if harrowing opus. His vocals are often half-whispered yet still have great impact.

This is followed by two further 10 minute epics. “From the start I told you my dark and colourful past, you had to ask”, he croaks on the self-chastising Sorry With A Song. Country Dumb follows a similar template with Lindsey Buckingham style mandolin-ish guitars dancing with swooping and swooning strings, falling in and out of minor keys like the drunken lovers Pearson writes about. In another parallel, each of these songs seem to end but then return in soft codas like a relationship you can’t quite let go but can’t quite get hold of again either. Closing track Drive Her Out seems almost flimsy by comparison, its refrain “could you help me drive her out of my mind” drifting away to a dusty horizon.

The album as a whole will seem far too bleak and navel gazey for some, yet fans of Lift To Experience won’t be surprised by the scope and depth on display here. Stark yet still overtly dramatic, it’s an astonishing showcase of confessional songwriting. Lets savour this, as it’ll no doubt be a long wait until the next one.