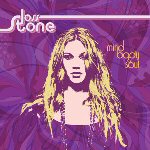 If Joss Stone didn’t exist, someone would have to invent her. Frighteningly young, incredibly photogenic and blessed with a remarkable voice, she’s a marketing man’s dream. Debut album The Soul Sessions caught everyone by surprise, with Stone’s record company being keen to sell the record on the basis of the songs alone – even going as far to obscure her features on the sleeve.

Yet with the cat well and truly out of the bag now, Mind Body & Soul is an opportunity for Stone to prove that she can live up to the hype. While the debut consisted of an inspired range of cover versions, 12 of the 14 tracks on the follow-up were co-written by Stone herself.

The overall sound here is obviously more contemporary but the feel of the songs isn’t that far removed from The Soul Sessions. Stone’s more modern influence is obvious and some hardcore soul fans may be disappointed at the more poppy feel of some of the tracks. What lifts the material up to another level though is Stone’s voice – warm, rich and yes, soulful, she could sing the entire oeuvre of McFly or Busted and make it sound good.

You Had Me is about as upbeat as it gets – it’s a storming RnB flavoured dance track which brings to mind mid-period Stevie Wonder. Yet the success of The Soul Sessions means that we never stray too far from the ballads that were that albums trademark. Opener Right To Be Wrong is just gorgeous, a lush, uplifting song which includes Stone singing, rather improbably, “I may be singing out of key”. You’re not, love.

Lyrically, this is remarkably mature for someone who is still very much in her teens. References to iPods (“Do you understand that I’m in love with you/I keep our song on repeat on my iPod” from Understand) may seem a bit jarring, but it works perfectly well. Even the odd line such as “I love him, he makes me go oo-oo-ooooo” could produce a cringe but is actually immensely endearing.

Although Mind Body & Soul is dominated by ballads, Stone isn’t afraid to experiment. Less Is More dips a toe into reggae waters and comes up trumps, being one of the highlights of the album. Don’t Cha Wanna Ride could even teach Beyonce a few tricks about being funky, while Killing Time is another stand out track, featuring the ironically self-aware line “I know I may be young and know nothing of this world”, which almost sounds like a pre-emptive two fingers to her critics.

Mind Body & Soul isn’t a perfect album by any means – the sound becomes somewhat homogenous at times and it would be nice to hear Stone’s more upbeat sound a bit more often. It’s also slightly too long, and overstays its welcome at 14 tracks.

However, these are but minor criticisms. The soul purists will continue to be upset that a white teenage girl from Devon is now at the forefront of British music, but frankly that’s their problem. Like Eminem, The Beatles and Elvis before her, Stone just happens to be very good at what she does – race, age or origin has nothing to do with it. This is a terrific album, and on this basis Joss Stone is going to be a household name for years and years to come.