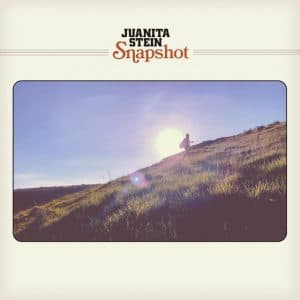 It’s always tempting to view everything which is happening through the prism of the now. So Snapshot’s closeness, its sadness, its sense of longing for a previous time could lead you to the conclusion that this is Juanita Stein’s pandemic album.

But it isn’t. Snapshot’s sadness comes from a more regular source – the death of a loved one, in this case Stein’s father, with the album being her response to that event. It’s an attempt to make sense of it all.

Snapshot is her third solo record and the first which sees her reunite with her brother and fellow Howling Bells member Joel Stein. His contributions are to add unexpected bursts of noise, squalls of guitar which wrong-foot and surprise. On 1, 2, 3, 4, 5, 6 it gives a surprising direction shift to the bucolic meander the song had previously been taking. On L.O.T.F. it adds a whole bunch of weight to the doomy arpeggios that loop around the foreground.

L.O.T.F is a great song, marching incessantly forward, melancholy and wistful and ever-so-slightly bitter all at the same time. Stein has always had a voice that does darkly haunting melancholia well, and here, in a song about her childhood, it’s on fertile ground.

There is much to like about Snapshot. The title track is delicate and woozy, thinly plucked strings flittering around Stein’s voice. The Mavericks is whispered and conspiratorial, bathed in noir-ish shadows, talking darkly about how “not everything is meant to be a straight line”, doubtless much to the despair of carpenters nationwide.

There’s a sense of completeness you get from playing Snapshot to its conclusion which is entirely satisfying. Although, given the end is at the end of a song called In The End, that’s not the result of the most forensic dissection of a complex web of lyrical hints. But as Stein delicately coos “everyone will lose someone in the end” over a countrified jangle it’s hard not to hope that the conclusion has come with some sort of sense of acceptance and a degree of hope.

With Snapshot, Stein has taken a deeply personal event and turned it into something with a far broader appeal. It’s her best solo album yet.