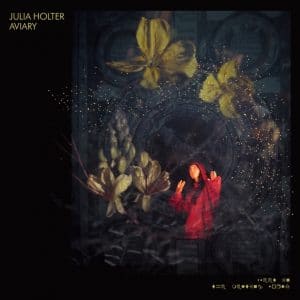 With 2015’s critically acclaimed Have You In My Wilderness, Los Angeles-based avant-garde composer/songwriter Julia Holter finally seemed to have discovered a winning balance between innovation and accessibility. While earlier records Tragedy and Ekstasis had been complex and challenging, characterised by long, meandering sections which frequently became impenetrable, Have You In My Wilderness, although still highly imaginative in its song structures and instrumentation, had shorter tracks, a refreshing melodic simplicity and a welcome reining in of self-indulgence that gave the album a much wider appeal.

Rather than building upon this successful shift in direction, Holter has opted to step back into the swirling maelstrom of her previous work both feet first. At 90 minutes and with 15 tracks almost all clocking in at 5 minutes plus, Aviary is a behemoth of an album, baulking under its sheer weight of ideas and dauntingly uncompromising throughout.

Taking as its starting point a line from a 2009 short story by Lebanese author Etel Adnan: “I found myself in an aviary full of shrieking birds”, Aviary is essentially a series of sonic collages, rather than songs in any kind of conventional sense. Often resembling the soundtrack of a particularly unsettling horror movie chronicling the modern world’s increasingly dystopian direction, the lyrics contain historical references ranging from Joan of Arc and the Crusades to the more obscure Dance of St Vitus. Holter has embraced weighty concepts in the past – Tragedy was inspired by an ancient Greek play and Loud City Song by a 1944 novella by Collette – but never before has she created something so expansive in its strangeness.

Aviary begins dramatically with a barrage of hovering strings, crashing cymbals and howling vocals, starting as it means to go on for the ensuing hour and a half, during which time the listener is offered little respite in a display of virtuosity that’s both brilliant and baffling.  It would require an essay to detail everything going on across this extraordinarily ambitious tapestry of music, but to give just a few examples, Chaitus is eight minutes of what sounds like the accompaniment to a medieval banquet (some lyrics are taken from an Occitan troubadour song), all wandering woodwind and hushed choral murmurs, while Underneath The Moon recalls Kate Bush at her most experimental, marrying moments of pure drama with wilful, chaotic weirdness. Colligiere is an elegant Ólafur Arnalds-like piece of modern classical underpinned by subtle electronica; the ghost of Bush looms large again on Les Jeux To You, a gentle piano ballad that gradually morphs into an urgent, frenetic babble of voices; In Gardens Muteness is a torch song performed by angels.

Closing track So Sad Song is a hushed, sad lullaby that ends the album on an uncharacteristically calm note, by which time the brain has been thoroughly saturated to the point of being utterly overwhelmed. Aviary is not a great album – it’s too much of an ordeal for that accolade, requiring multiple listens to even start to engage with meaningfully. But it is, in its own idiosyncratic way, a towering artistic accomplishment. Just be prepared for a hard slog scaling the summit.