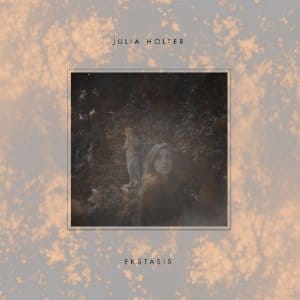 Superlatives deployed in support of this eagerly anticipated second album from sound artist Julia Holter know few bounds. This is no mere coincidence either, as Ekstasis arrives hot on the heels of her stunning, otherworldly debut Tragedy – a substantial word of mouth success in 2011. It’s hard to begrudge Holter any of this recognition and acclaim, so satisfying is it to see an artist challenge preconceptions of what wider audiences might be willing to accept. Her music demands total immersion and concentration from the listener.

Yet some reservations remain when approaching Ekstasis. It lacks some of the conceptual ingenuity of Tragedy, as well as sounding a good deal less unusual and surprising. Some may argue that it is simply more focused and less introspective – others that it’s much easier to summon reference points for Ekstasis’ more earthy approach. There are moments when it recalls the rigour and precision of Stereolab but, much more apparent (perhaps unnervingly so) is the similarity between Holter’s vocal delivery and that of the late, much missed Trish Keenan from Broadcast. On the opening Marienbad, the similarity is so marked as to make this seem like a visit from a ghost.

Although it misses some of Tragedy’s moments of overwhelming pathos, along with some of its more abrasive, synaesthetic qualities, it would be unfair to label Ekstasis conventional. These nocturnal reveries make for a dreamlike wonder of contemporary avant pop. Marienbad, forever teetering just on the right side of twee, feels elaborately stitched together. Even at her most accessible (In The Same Room, built around a rudimentary drum machine pattern), Holter can’t resist elements of deliberate weirdness as sounds emerge and disappear.

It’s also clear that Ekstasis sees Holter most preoccupied with exploring the possibilities and contours of the human voice. Four Gardens may be the best example of this, veering as it does between relatively conventional song and collage of peculiar, uncontrollable non-verbal utterances. Holter arguably also saves the best for last here with the dazzling This Is Ekstasis, an ingeniously constructed piece that appears to consist of a series of loosely connected ideas. It’s like a musical take on a word association game – or the recovery of memories once thought to be lost by some trigger in the here and now. Vocally, it is exquisite – with Holter merging her love for medieval forms and techniques with modern approaches to improvisation, arrangement and production.

Holter is arguably at her best when exploring texture. Boy In The Moon is this album’s wonderful centrepiece, perhaps the closest thing here to the world she so brilliantly realised on Tragedy. It shows just how adept she is at creating and sustaining an atmosphere. On the other hand, the appearance of drum machines and handclaps sometimes feel less like percussive support and more like a dangerous intrusion into an otherwise hermetic sound world. This is most obviously apparent when comparing the stark, empathetic, beautiful Goddess Eyes from Tragedy and the more rhythmically anchored take included here (Goddess Eyes II). The earlier version relied only on a pulsing heartbeat of a synth kick drum for its foundation, whilst the version on Ekstasis incorporates a conventional backbeat. The more broken and disjointed percussion on Four Gardens works considerably better, blending more comfortably with the track’s overall allure.

Although it’s possible to find minor disappointments and flaws in Ekstasis’ skilfully woven tapestry, this should not obscure Holter’s manifest talents. She is a determined artist, largely refusing the easy options in favour of something more restless and exciting. Perhaps for this reason, she is at her best when also at her most challenging and provocative.