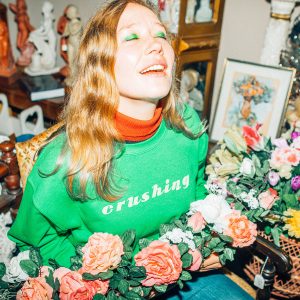 Julia Jacklin first appeared in our lives a few years ago, the latest in a seemingly endless stream of Australian singer/songwriters, whose debut album Don’t Let The Kids Win was a striking and often beautiful take on the various travails of burgeoning adulthood.

Crushing is her follow-up, and it’s fair to say she’s taking things up another level. It is very much a break-up album, which is well-trodden territory, but the way that she frames her heartbreak makes the record a very affecting listen.

This is a reasonably slow-burning introduction, and it’s with Head Alone that Crushing really kicks into gear. A jangly hymn to personal space and body autonomy (“I don’t want to be touched all the time, I raised my body up to be mine” runs the addictive chorus), it’s one of those songs that you find yourself coming back to time and time again.

There are moments on this album that are simply heart-stoppingly beautiful. Don’t Know How To Keep Loving You is a highlight, a lovely ghostly ballad that looks at the things you’ll miss when a relationship starts to break down – “I want your mother to stay friends with mine” – before realising that it’s a futile gesture to stay together. As Jacklin puts it in a gorgeously poetic way, “every gift you buy me, I know what’s inside, what do I do now, there’s nothing left to find”.

When The Family Flies In has a similarly frail tone, as does the impossibly sad Good Guy which addresses a man with commitment issues. “Tell me I’m the love of your life, just for a night, even if you don’t feel it” opens the song, and it becomes no less poignant from there. Pressure To Party is more upbeat but no less poignant, summing up the pressure to “get back out there” after a break-up: “meeting a stranger, touching his face, I don’t want anyone to ever take your place”.

Jacklin has named Angel Olsen as an influence and the similarity is unmistakable, both in her voice and in Burke Reid’s production, which presents these songs in a perfectly intimate and stripped back way. There are also elements reminiscent of Sharon Van Etten‘s more stately moments, and when she turns up the pace a bit on tracks like You Were Right a lineage can be traced to Liz Phair.

Yet Jacklin isn’t an impersonator – these songs are stamped full of her personality and they mark a major evolution as a songwriter. As the final chords of the heartrending Comfort ring out, it’s impossible not to think that yet another major Antipodean talent has put a new marker down.