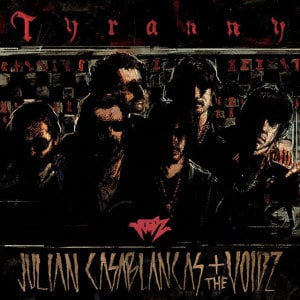 Julian Casablancas, lynchpin of The Strokes, has returned once again. But if you are looking for the great next step of the man that one day, long ago, wrote albums such as Is This It and Room On Fire, you should prepare yourself to be disappointed, for Tyranny is not the album you have been waiting for. A conglomeration of massive ideas and sounds twisted together in the hope that it will create something magnificent, it falls short. Time and time again, it feels like something could have been salvaged amongst the eclectic collection of brash sounds. What the album really needed was someone to step in and tell these boys that they were overdoing it, and that sometimes less is more.

The album opens with Take Me In Your Army, which is underlined by a beat that it is not too dissimilar to The Strokes’s 2006 single You Only Live Once. Casablancas may have a new crew, but has not completely shaken off the shadow of his past. That’s not to say it really sounds altogether like The Strokes, because there’s something distinctly different with The Voidz. It opens up with this clear message of political disruption and, alongside the brash album title, it feels as though you should prepare yourself for a long journey through a strong political statement. It swirls and paints an image of brainwashing, as Casablancas repeatedly pleas “Take me in your army” against a deranged backdrop. But that’s not quite how the rest of the album unfolds.

Alongside its moments of Cabaret Voltaire and industrial rock inspired interludes, there’s a whole load of other influences and ideas fighting for space throughout these tracks. Instead of delving right into one idea, Tyranny is an album that skirts around the edges of so many different styles with little coherence, as indie rock tinges the edges, but experimental chromaticism and complex polyrhythms run riot against one another. A perfect example of this comes in the form of the Human Sadness. Clocking in at just under 11 minutes, this track is a cacophony of bizarre interludes that leaves you confused and ultimately underwhelmed. There are several points where it just begs to be stopped, but still it continues. Even after several listens, you still can’t pinpoint what it sounds like.

However, Where No Eagles Fly and Johan Von Bronx mark moments when it seems that all is not lost. There’s more structure, more idea of how the tracks come together, and they run steadfast with that industrial, tyrannic sound that the album opened with. Even Nintendo Blood has a life its own, and brings around a slight opening for hope, possibly because it’s marginally less difficult to listen to that the bulk of the album. It has its electronic, early ’90s Nintendo-style opening, and works as a segment of light in an album that is brimming with darkness.

But it’s still difficult to take it all in on one listen, as Casablancas screeches and screams, whilst brash guitars emblazon the sky around him, and electronic drum kits mechanically throw out robotic beats. Eventually there is so much going on, it is hard to know where to look, or what, in fact, you are even looking at in the first place.

At its best moments, Tyranny sounds like a Strokes record; in its worst moments it sounds like an experiment that hasn’t quite found its form. It is ultimately a real strain to listen to in one sitting, both because of its relentless effort to confront and surprise you, but also in its pursuit to do something. It’s just really hard to decipher what that something is.