Julianna Barwick – Healing Is A Miracle 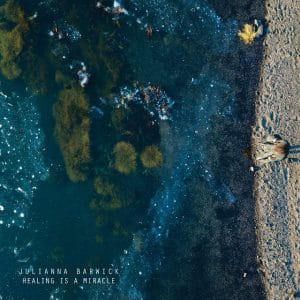 Since releasing her debut album The Magic Place back in 2011, Julianna Barwick has been one of the most artistically consistent and clearly defined artists, her looped, distantly reverberating vocals forming a celestial, central presence in her music. Yet, over the years these vocals have nestled alongside an incrementally expanding palette of instrumental and ambient sounds.

On 2013’s Nepenthe, the relatively lo-fi production of her debut was subtly sidelined in favour of a less airy, less fragile, paradoxically deeper sound. There was even the occasional decipherable lyric among the ethereal, wordless vocalising. 2016’s Will saw the trend continue with greater electronic representation and a discreet foregrounding of new sonic elements. New album Healing Is A Miracle is her most evolved and ambitious album yet (and first released on the Ninja Tune label) and also sees her work with a trio of similarly disposed artists to elevate it to a higher level. The title comes from Barwick finding amazement in some of life’s often overlooked details, specifically the human body’s ability for self-healing and these humble, self-contained ideas feel curiously well-matched to her music.

Inspirit is a traditional Barwick album opener in many ways, minimal yet cathedral-like and evoking imagery of clouds parting for oncoming beams of light. Mary Lattimore contributes harp to Oh, Memory, dispersing it over the track like a fine, iridescent powder. Barwick’s association with Jónsi dates back to when she visited Iceland to record Nepenthe and on In Light their vocals soar and flit, combining to stunning effect. It’s like watching distant musical siblings being reunited after years of being apart, as emotional floodgates are opened. Even more remarkable are the quasi-mechanical cycles that softly crunch away in the background.

Safe is the album’s wonder-inspiring centrepiece, very much the stop-you-in-your-tracks moment. A feeling of cleansing purity settles over the piece as Barwick’s repeated vocal gradually grows, transitions and fades. It feels like the sound of psychological slates being erased, like experiencing the feeling of comfort that comes with returning to familiar surroundings. Elsewhere, the title track manages to recall both the watery sadness of Grouper and the emotive humanity of Eluvium. Flowers meanwhile pits wavering electronic foundations against her skybound vocals, resulting in an unexpected dark tension. Wishing Well offers restorative calm however before she combines with fellow Los Angeles resident Nosaj Thing on closing track Nod.

Healing Is A Miracle is the sound of an artist gently and creatively exploring new ways to progress her music without sacrificing any of the crystalline, deceptively powerful identity she’s built up over the years. Barwick’s music has always had a strong healing element to it but, arguably at the very moment where we need it most, she has delivered her most soothing and assuaging set of songs to date, music to help re-establish personal harmony and emotional equilibrium.