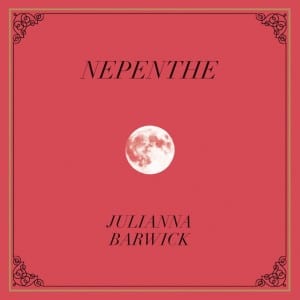 With 2009’s stunning Florine EP and 2011’s equally great The Magic Place, ambient musician Julianna Barwick established herself as simply one of the most creative, experimental, and innovative artists working today, a phenomenon that continues on the grand Nepenthe. Nepenthe is an emotional album inspired by a death in Barwick’s family and one that prominently features Icelandic string ensemble Amiina and a teenage chorus. Having previously worked with Sharon Van Etten recording on last year’s great Tramp and having released an album with Helado Negro, Barwick is fully collaborative on Nepenthe. But her stunning, layered, operatic, and atmospheric voice shines through the noise.

Barwick continues right where she left off on The Magic Place with the otherworldly opening track Offing, a typical Barwick track featuring layered, looped, and reverb-laden vocals. Yet it’s with the haunting The Harbinger that Barwick’s penchant for collaboration comes into play. Barwick contains the great ability to mesh Amiina’s strings, a chorus, and her own voice into one coherent manifestation of pure beauty, until minimal, sombre strikes of the piano complement the previously angelic noises of the song. Only two songs in, Nepenthe becomes so immediately cinematic and full of emotion that you can’t help but embrace your budding senses of wonder and hope. These senses continue onto the third track, One Half, whose creeping strings and comparatively decipherable lyrics suggest spring, a time of birth or rebirth from the tragedy of the gloomy winter that so previously dominated Barwick’s sound. “I guess I was asleep at night,” she sings on One Half, as if to say that her entire previous catalogue was the soundtrack to a long, dark dream.

If One Half is waking up from a dream, the synths and droney strings of Look Into Your Own Mind represent one’s first walk of the day into beautifully desolate nature. On Look Into Your Own Mind, Barwick’s voice is lower in the mix, ostensibly dominated by her naturalistic surroundings. Which all leads up to Pyrrhic, a track on which Amiina’s menacing strings ultimately challenge the goal relayed by the album’s title: Nepenthe refers to the drug of forgetfulness as seen in Greek literature, and to forget sorrow is exactly what Barwick wants to do with her bad dream – one that was unfortunately real.

Yet, the darkness of Pyrrhic is Barwick’s temporary inability to forget, the part of the mourning process that’s likely still difficult for Barwick to this day. But even if Forever, the companion piece to Pyrrhic, and its corresponding seemingly infinite loops likely refer to the amount of time that Barwick’s loved one will be gone, at least Forever’s vocal and instrumental loops build in volume and add more elements as the song progresses: Barwick may never truly forget, but she’ll be able to surround herself with other noise on which to concentrate.

Overall, Nepenthe more than builds upon the promise of Barwick’s Pacing EP, released earlier this year. While it may be a tremendously personal album for Barwick, you can get lost in Nepenthe for not only its sheer beauty, but for its ability to evoke visual cues and tell stories with its music. Much like another excellent ambient album released this year, Mountains’ Centralia, Nepenthe is concerned with its relationship vis a vis its creator and its explorations of tone, structure, and timbre. But also like that of Centralia, the relationship between Nepenthe and the music listening public cannot be ignored; its ability to establish a spiritual connection with the most logical naysayers makes it truly transcendent.