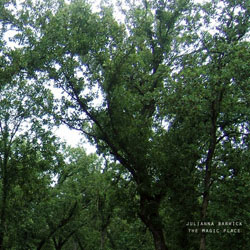 The Magic Place’s first track is called Envelop. Whether that’s a statement of purpose or a highly self-referential crack towards the easiest copy a journalist can write about Julianna Barwick is unknown, but it certainly cuts to the heart of her music.

In what sounds like a choir of ghosts, she constructs songs out of looped clusters of her sighing voice, deep forlorn rumbles, and the occasional tangible instrument which bobs its head just above Barwick’s ocean of sound. This is a very texture-heavy album, one on which songs sound more like deteriorated old photographs than anything with motion (the only thing even slightly resembling a crescendo comes with the penultimate Prizewinning), but it will still stop anyone in their tracks with its remarkable beauty.

The Magic Place is very much an ambient album. The deep waves of frigid, environmental sound Barwick cues up tend to wash over the listener, leaving no room for tangible melody or arc. She divides her voice into a thousand pieces, all singing together in a churchy, choral eruption. There are no empty spaces; instead, the entire album is filled out with her ringing incantations. Songs such as White Flag are almost completely a cappella, encompassing a truly stunning midsection where her various voices coalesce into a singular angelic boon. In a world where so many artists would rather blur their voices behind a comfortable layer of haze, Barwick’s forthrightness is both jarring and immediately refreshing.

There is the occasional identifiable sound – dampened piano clinks, ramshackle drums – but, like the title implies, The Magic Place is a very transporting listen. Juliana has dug out her own little sonic space to let her wildest musical ideas flourish. You get the distinct sense that this place was conceived as a spatial area, part of an unseen landscape, diffusing from mystic forests, spellbound cities and primordial mountains. For a brief 40 minutes she introduces you to this place, taking you by the hand to introduce you to its peaceful, immovable grace, and then bids you farewell with the grounding, placid piano of Flown. It’s one of those albums that truly exists in its own plane of existence.

It’s hard to really get a grasp on the scale of The Magic Place, simply because of how modest its components are and how high the record aims. Sometimes it hits the ancient, reverberating sacredness that could score any number of dark fantasies, but occasionally it just sounds like a girl singing with her piano. In that sense it’s a curiously welcoming album, one with no pretence, which demands little more than your opened ears – strange for the elemental experimental bent of the music. Barwick is crafting gorgeously effecting sounds in a way that nobody has quite heard before, far beyond the snickering Enya comparisons or the reductive ties to Brian Eno‘s ambience, this is music for living to.