by John Murphy
published: 7 May 2016 in Album Reviews
Tweet 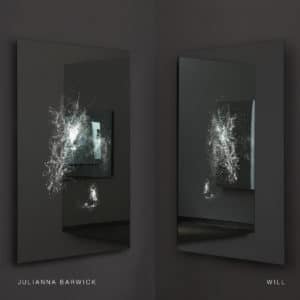 2016 marks the 10-year anniversary of the release of Julianna Barwick‘s first album, Sanguine. and it’s impressive to see just how much her sound has subtly evolved over the decade. Sanguine consisted of snippets of short, loop-based, mostly untitled songs, while new album Will sees her ‘go digital’ and unveil a new sound involving synths, string sections and even, in a couple of instances, some actual lyrics. The loop pedals are still present of course, and it’s not a huge leap from previous albums The Magic Place and Nepenthe, but the overall sound is richer and lusher than ever before.

One aspect that Will has in common with the rest of Barwick’s back catalogue is its transportive quality, its ability to make the listener feel like they’ve entered a whole different world. Opening track St Apolonia feels like waking up in some long-abandoned church, Barwick’s wordless vocals looped over a dramatic string section while a solitary piano sadly intones nearby. Yet it’s Nebula where Will really takes off, five and a half minutes of breathy Barwick vocals with a synth that seems to pulse in time with her voice. Haunting is a much over-used adjective, but it perfectly describes Nebula.

What’s striking about Wild is how sad much of it sounds. Ambient music is usually dismissed as background aural wallpaper, but much like Aphex Twin‘s Avril 14th, Barwick is capable of conjuring up a deep air of melancholy without having to utter a word or strike a beat. Heading Home, for example, is layer on layer of piano chords and multi-tracked vocals and sounds like a big burst of relief from someone who’s been travelling for far too long. Big Hollow packs a similarly emotional punch, sounding almost like a requiem for something long lost and never to be recovered.

The pace remains steady almost throughout – Same is built upon a barrage of synths but remains resolutely glacial, while the beautiful Beached is the perfect accompaniment to lull you off to sleep, in the best possible way. It’s only towards the end of the album that this template begins to be, if not quite shattered, slowly edged away from. Someway is very much in the Barwick tradition: choral vocals which begin to sound almost celebratory which loop over and over, until the sound of Mas Ysa‘s Thomas Arsenault slowly breaks through. It’s here that the album’s first recognisable lyrics that can be heard, a whisper of “someway… someway… someway”.

It’s on the final track See, Know that the album’s biggest departure comes – there’s shuffling beats, an insistent keyboard riff that threatens to break into a dance track and the sound of Barwick gently repeating the song’s title over and over again as the music becomes faster and the percussion more obtrusive. Whether this is a one-off or a signalling of the direction of Barwick’s next album remains to be seen, but it’s an exciting proposition none the less. In the meanwhile, dive into Will and luxuriate in every gorgeous second of it, for few artists are making music like this.