Julie’s Haircut – Invocation And Ritual Dance Of My Demon Twin 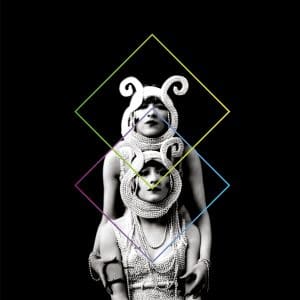 Julie’s Haircut is now well into its second decade and is no signs of fatigue whatsoever. The band’s progression from garage rock infants to krautrock/psychedelic explorers has taken a while and a few line-up changes, but throughout their evolution, Julie’s Haircut could never be accused of being boring and shying away from adventure. Indeed since 2005 they’ve started to use the improvisational techniques utilised by Miles Davis and Can in order to “find” their own songs and their own path.

Invocation And Ritual Dance Of My Demon Twin is not only the fruits of the band’s most recent improvisational song finding mission, but also an invitation to whoever finds this album to join them on a journey into a sonic otherworld where some kind of universal truth might be discovered.

It’s not for nothing that the last track on the album, Koan, is named after a Buddhist practice of ruminating on an unsolvable riddle in order to address psychic barriers and problems. This is an album that attempts to open doors and create a headspace where anything is possible. It just so happens that it is also an album that you pop on repeat and happily dance around like a wide eyed loon to for as long as needed. Self-realisation, invocations and exploration of the psyche are not necessary, but then as the album progresses the need to move (even if it’s just an appreciative nod of the head) is impossible to ignore.

The 11 and a half minute opening gambit of Zukunft sets the mood for what is to follow. A motorik road trip into the desert of the soul, it’s a hypnotic and expansive exposition that has its roots in Can’s driving repetition but couples that robotic essence with a sense of unhinged freedom. There are elements of Captain Beefheart at his most free here, but also the shamanic meanderings of The Doors at their most stoned. It’s out on the perimeter certainly, but it also has an immediacy that keeps it in the present.

This exploration of opposing forces continues throughout the course of the album as occasionally threatening passages give way to moments of true wonder, but it’s when Julie’s Haircut combine these apparently opposing forces that they really take off. It’s there in the squalling close of The Fire Sermon and in the space age disaster movie aesthetics of Salting Traces where a feel of claustrophobia and techno doom is off-set by the rustic folk charm of Cycles. There’s still a threatening undercurrent at play, the hypnotic guitar lines keep it in check; it’s like a rabid dog being held in a cage of silk strands.

Although Julie’s Haircut like to dabble in emotional and psychological extremes, they often submit to a little laid back chillout time. This can be found on the Orpheus Rising which borrows a little from Fela Kuti for its after-hours lounge jazz, sounding for all the world like the kind of thing that would be playing in the Restaurant At The End Of The Universe on a Monday night (ask for Zaphod). Gathering Light initially possesses a similar feel, but with a liberal application of feedback and squealing sax there’s a little more edge to it.

The key to Invocation And Ritual Dance is that it really should be listened to as a whole and not as individual tracks. These winding compositions really need immersion to fully pay off, give into them completely, fall under their spell and it becomes clear that Julie’s Haircut have created something truly magical. Shall we dance?