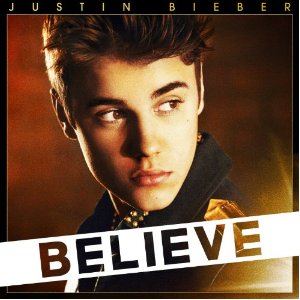 The ubiquitous Bieb’s upward trajectory continues to astound, and – for the time being, at least – would appear to still have a long way to go before the young whippersnapper puffs his cheeks, shrugs his shoulders and asks big pal Usher, “What next?”

Musically speaking, what comes next is readily apparent: dial back the bubblegum pop, snatch a Spanish guitar and rope in credible, “urban” names in production, like Darkchild and Diplo. While you’re at it, lose the mop-top and invest in a leather jacket. It’s vintage Justin Timberlake territory.

Believe, the 18-year-old’s third album proper (if its predecessor Under The Misteltoe, an album of Christmas songs, counts as one), looks set to fulfill its commercial remit with aplomb, showing off its creator’s natural ability to entertain and strike a deft balancing act between convincing R&B and profitable pop as it goes.

That said, first track All Around The World achieves the feat with a hefty helping of a third element: high-energy, Eurocentric dance-pop David Guetta himself would be proud of. As far as opening salvos go, it seems a smart move. Mike Posner-penned Boyfriend switches stance to follow up with moody, N*E*R*D-style beats – and the aforementioned leather jacket.

A trio of styles is completed with the crunching-yet-gushing love song As Long As You Love Me (sadly not a cover of the Backstreet Boys‘ bona fide classic) before Believe settles into a groove: Catching Feelings runs through slick, so-far-so-easy guitar-picking R&B territory; Take You combines dreamy synth riffs and huge percussion with an eminently imitable refrain; Fall gets away with setting vocals centre stage against a backdrop of par-for-the-course acoustic jiggery-pokery.

Certain efforts do raise their heads above the parapet. In Hit-Boy-produced Right Here, Bieber piggybacks Drake‘s credibility (if not his edge) without necessarily finding himself overshadowed. In Die In Your Arms, the album briefly elevates itself to the heights of vintage Michael Jackson compositions (sampling his We’ve Got A Good Thing Going), an inspiration the Canadian aspires to in more than just the dancing stakes.

Following such relative heights, the album’s tail-end finds itself in the shade. Thought Of You thumps along with few idiosyncrasies, like a slick mobile phone ad; One Love apes earlier Bieber hit Baby, but fails to capture any of its charm; the title track ticks the ballad box and little more. Even the presence of Nicki Minaj on Beauty And A Beat cannot completely obscure the suspicion that the team behind Believe have a glassy-eyed tendency to go through the motions.

Such is life. As long as we bear in mind that this is a Justin Bieber album, and that he’s unlikely to produce the next OK Computer in the foreseeable future, we can see Believe for what it is: a mostly harmless exercise in selling records. Perhaps one day the young man’s true talents will shine through unencumbered, and we’ll all end up eating our own words. Or perhaps he’ll play out his career in student unions. You never know.