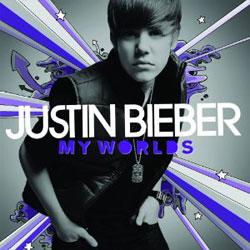 Aww, little Justin Bieber. Butter wouldn’t melt, would it? Just look at his cute little dimples, his nicely combed hair, the way he pouts like a big grown up boy. Bless! Oh, look – he’s playing piano in a mall! I bet he’s singing about swimming or summer camp or something… Wait, what?

Okay, so it’s not young Justin’s fault that the sight and sound of tweenie popstars singing about deep commitment issues will freak some of us out. In fact, we’re clearly in the minority: My Worlds is a combination of the My World debut album and My World 2.0 EPs, the former having topped charts, the latter already a Billboard Number 1 and selling by the bucketload Stateside.

Bieber, from Stratford, Ontario, was signed by Usher at just 13 years of age, and is still just a lad at 16. Such youth is – initially, at least – a little disarming: the first few bars of opening track One Time have the feel of pre-school programming, Justin’s boyish tones more evocative of a gang show than a youthful R&B Lothario.

That impression, however, is one that doesn’t last; One Time blossoms into a slicker-than-slick production, its catchy chorus hooking into its intended audience with all the imitable requisites. It’s hardly rocket science, but neither does it claim to be: it does exactly what it says on the tin, as they say.

Thereafter tracks (from My World, especially) exhibit a disappointing-yet-seemingly-inevitable tendency to blend into one another, both aurally and lyrically: Favourite Girl trades on a light, disposable hip-hop backing, Bieber’s adopted maturity and authority (“You’re my special little lady”) somewhat at odds with his – and his audience’s – years.

Bigger, similarly, sees young Justin elevated to sexy adulthood (“Heartbreaker when I was little / But now I’m bigger”) over an otherwise innocuous track, while One Less Lonely Girl – after Down To Earth has provided the obligatory piano ballad – makes what a cynic would call an unashamed and unapologetic attempt to woo every tween girl so inclined to lend an ear.

Merits are to be found, however, such as Love Me’s Euro-inspired electro take on The Cardigans‘ Love Fool, and My World 2.0’s lead single Baby – featuring Ludacris, obviously – which is already bothering the charts, its neat production and soaring chorus in this instance saving My Worlds’ midsection from sagging into obscurity.

Somebody To Love (not a cover of the Queen classic) then introduces a stronger dance element – doffing a cap to Lady Gaga, perhaps – before Stuck In The Moment’s harmless progression namechecks famous tragic couples like a Taylor Swift track, U Smile engages classic pop principles with panache, and Eenie Meenie benefits from the not inconsiderable talents – and appeal – of Sean Kingston.

My Worlds, it seems, while never particularly innovative, is largely free of filler, and is for the most part an effective conduit for Bieber’s singing and songwriting talents. Okay, so it’s aimed fairly squarely at a particularly receptive market – and it may not wind up in the hands of those whose teenage years are just a memory – but there’s enough here to suggest that Justin Bieber will be a familiar pop name in the years to come.