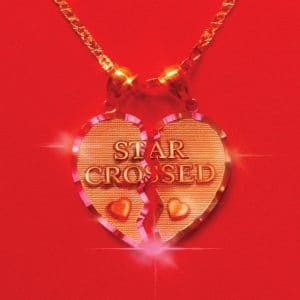 In 2018, Kacey Musgraves released her third album Golden Hour, a record that was immediately heralded as the best of her career. It was a slyly subversive album, given the inherent conservatism of much of country music: here was a record which featured vocoders, songs written under the influence of LSD, and LBGTQ anthems such as Rainbow.

Most of all, it was an album written and recorded after her marriage to fellow singer/songwriter Ruston Kelly, and as such was practically glowing with love and contentment. Three years on, and a lot has changed: last year, Musgraves and Kelly filed for divorce, and Star-Crossed is very much Musgraves’ ‘break-up album’.

Musically though, things remain much the same. This is a good thing of course – nobody quite does classy, accessible easy-listening like Musgraves, but anyone expecting screaming and shouting will be in for a surprise. Lyrically though, she can be absolutely biting: see Breadwinner’s sly couplet of “he wants a breadwinner, he wants your dinner, until he ain’t hungry anymore”. Indeed, from the opening lines of the title-track (“let me set the scene, two lovers ripped apart right at the seams”), it’s clear that this is a cathartic album for Musgraves.

The wistful Good Wife, with its slight RnB influences, continues the theme, with Musgraves comparing the expectations of marriage with the creeping realisation that this wasn’t to be a life-long relationship at all. Camera Roll is probably the album’s most affecting moment, Musgraves scrolling through her phone, looking at photographs of her ex-husband. “I don’t want to see them, but I can’t delete them,” Musgraves muses, before insisting that “I’m moving on, and now you’re only living in my phone”. It’s a song positively drowning in regret and sadness, only accentuated by Musgraves’ beautiful delivery.

Even the moving on isn’t as fulfilling as you may expect – the lilting acoustic ballad Hook Up Scene talks of how one night stands are ultimately empty and pointless (“A pretty face might get you far but still it can’t replace the kind of real connection that I crave”). Justified, meanwhile, turns the spotlight on herself, examining her own feelings following her marriage while What Doesn’t Kill You is a quietly defiant promise to keep striving for happiness despite the fact that “I’ve been through hell and back”.

You’d think that this may be uncomfortable listening, given that Musgraves is pretty much emptying her heart out for all to hear. Yet there’s a beautiful sheen to Star-Crossed that just makes it sound so effortlessly comfortable. Even an oddity like the pan pipes on There Is A Light sounds completely natural, with only the eerie, vocally distorted Spanish language closer Gracias A La Vida sounding like a bit of an outlier.

Like Taylor Swift before her, Kacey Musgraves transcended her country roots a while ago, and can now be said to be a fully fledged pop star. While this may not always hit the same glorious heights of Golden Hour, it makes for a fine companion record, and is a reminder that, as smooth and effortless the journey may seem, some major bumps in the road always lie ahead. It’s not quite her Blood On The Tracks, but it’s a record that’s similarly compelling to listen to.