Kaiser Chiefs – The Future Is Medieval 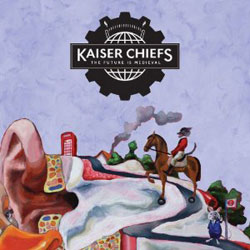 The music industry might well be in a state of paralysis when itcomes to releasing records, but this doesn’t necessarily mean theinterest isn’t there. Whilst the money’s scarce and while most actssink or swim on the basis of their first album, on the other side ofthe coin we’re prompted with more music blogs than ever before, highticket sales, a renewed interest in merchandise, &C.

Any old cynic would jibe that Kaiser Chiefs’ unique means ofreleasing a record – they offered “fans” the chance to select their own track listings and buy their own version of the album two weeks ahead of release date – isn’t a savvy response to the internet pirates,that the actual purpose of the scheme (fans pay for 20 tracks, createtheir own tracklist, most popular songs make up the fully-releasedrecord) is a desperate attempt to renew interest in a band who soundmore dated than a BNP conference speech.

The songs making up The Future Is Medieval can hardly be pickedapart from older numbers in the group’s back catalogue; the premise ofchoosing which tracks feature might sound interesting and interactivebut it’s a façade, a blocking device to prevent people fromacknowledging the lack of quality in the songs themselves. Not evenRadiohead could get away with this. The most important strength of analbum, the asset that makes it a more enjoyable experience than what apick’n’choose MP3 generation opt for, is its coherence, its naturalflow. Fans are choosing their favourite songs and the album is cobbledtogether at the time of asking – any chance of getting the KaiserChiefs’ first coherent, well-structured album is thrown right into thefire.

It begins well, however. Little Shocks’ short, sharp bursts ofguitar offer something a little different. But the majority of whatfollows is drawn-out and lacking in purpose. Choruses sound forced,particularly on Dead Or In Serious Trouble and Long Way FromCelebrating. Occasional experimental dabbling occurs during Man onMars’ psych-rock, sedated feel and Starts With Nothing’s bold attemptat pop music – more Pet Shop Boys than circa-2005’s Britpoprejuvenation. But at 13 tracks long and with no centrepiece, noadjoining theme, no recurring elements, it is a half-arsed throwingtogether of songs, joining arms to provide a 50-minute-long spell ofdrudgery.

Ricky Wilson and co. might have sensed an opportunity, and in somequarters at the very least the fan-choice scheme raised eyebrows and ascrupulous debate between converts and cynics. But here’s the coreproblem. Observing the band’s 2011 Glastonbury set, you notice thatfor each new song played within the set, there is barely a tap of thefeet. This might not seem unusual for a record barely at walking stagebut the album has been released in such a way that the vast majorityof potential listeners don’t know what’s going on and aren’t evenaware of a new album being shelved in the shops. Choosing a tracklistis the kind of passionate experience bands can end up splitting upover. Kaiser Chiefs have made the process into some sort of poll,resembling a social networking group rather than a record companymeeting. Props for trying something different, but this doesn’t boost the purpose of an album; it ends upharming it.