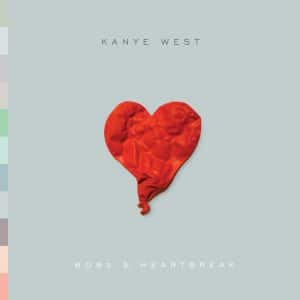 What happened to The Good Life? Kanye West seems to have abandoned the long-standing philosophy from his Graduation album – or has left it behind, at least, while he goes on a brief day-trip. “Taking a sample, looping it and doing the ‘throw your hands up in the sky’ thing has become such a cliché,” he said in a recent interview. “Hip-hop is over for me.”

Which begs the question, what should we come to expect from 808s & Heartbreak, the latest effort for a man known best to date for hip-hop? For one, a break-up album. There’s no joyful king-of-the-world tracks like Champion or The Glory here; instead we have anguished, soul-bearing, therapy session material, revolving almost exclusively around Kanye’s under-the-radar fallout with designer Alexis Phifer in April.

Kanye doesn’t mince words about his ex, as song titles like Heartless and Love Lockdown might suggest. Nor does he hold back on Welcome To Heartbreak, which find the 31-year-old reflecting on his party-heavy lifestyle and envying his friends’ picket-fence existences. On the introspective live track Pinocchio Story, Kanye pairs down the beat to near a cappella levels and asks the audience, with a pang of insecurity, “Do you think I sacrificed real life for the flashing lights?”

As moving as these lyrics are on paper and (occasionally) in song, their potency is significantly muted by the Auto-Tune effect that removes most traces of humanity from Kanye’s voice. As much as his stark confessions might pack an emotional punch altogether lacking from his pitch-corrected forebearer T-Pain, over the course of an entire album the Auto-Tune invariably overpowers his words, growing tiresome and borderline claustrophobic.

Perhaps most disappointing of all are the beats that we expect Kanye to sign, seal and deliver without a second’s thought. On 808s & Heartbreak his spaced-out synth-pop production equates simplicity and minimalism, often leaving his sparse melodies hanging in thin air like wet laundry. Opening track Say You Will sets the tone, indifferently drip-dropping along for more than six minutes amid thin choral arrangements and bare-bones percussion. After boasting that the album took him three weeks to make, 808s & Heartbreak suggests that the producer should have spent some time filling in the tracks rather than hoping to coast on their New Wave-inspired glossiness.

Kanye being Kanye, there are occasional moments of quirky craftsmanship scattered around. The mood perks up substantially when the rhythms take centre stage, as on the tribal march of lead single Love Lockdown. Meanwhile, Robocop serves as a fascinating exercise in controlled chaos, with lilting faux-strings, quick-shifting time signatures and sparkling verses about the aforementioned psycho girlfriend who “turned my life into Stephen King.” On the slow-simmering Street Lights, Kanye’s distorted vocals provide a suitably abrasive counterpoint to the song’s tender melody and dreamy female harmonies.

For the most part 808s & Heartbreak showcases the awkward dichotomy of emotion and mechanised sterility lurking gift-wrapped under a deceptively polished sheen. And it crystallises a distinct musical moment, as displayed on the mesmerising Lil’ Wayne duet See You In My Nightmares. With two of the rap game’s most respected MCs dropping the macho facade, flipping on the Auto-Tune and busting out a passionate club-banger about relationship troubles, Kanye is effectively ushering in a bizarre new emo-rap subgenre. Dr Dre, meet Dr Phil.