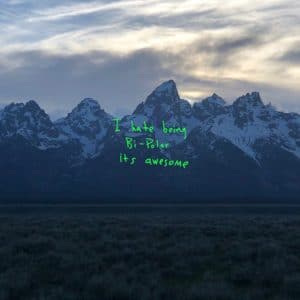 In light of Kanye West’s longevity – it is easy to forget that 14 years ago his contemporaries included Nelly, Fabolous and Chingy – it is now possible to split his output so far into three periods. The education trilogy (The College Dropout, Late Registration, Graduation) planted his unique production style on the map and gradually expanded on it, three subsequent releases (808s & Heartbreak, My Beautiful Dark Twisted Fantasy, Yeezus) showed a relentless drive for reinvention, and ever since 2016’s The Life Of Pablo we’ve been in a phase which sees him somewhat rudderless, flipping between modern trends, “the old Kanye” and something else entirely.

Ye opens with processed vocal harmonies and a tediously long spoken intro that sounds a lot like playing for time before launching into a confrontational verse, ending with “don’t get your tooth chipped like Frito-Lay”. There is a free-associative quality to the performance, which fits with his spoken advice earlier in the track to “just say it out loud to see how it feels”, and much of Ye follows this dogma to a fault: he was never the most technically accomplished rapper, but several lines are truly cringe-worthy.

All Mine has a brilliantly odd hook from Ant Clemons but its minimal beat peters out after one and a half middling verses, a wasted opportunity. Ghost Town in many ways suffers from the opposite problem, as its longer runtime is filled with disparate elements from different guests that never quite cohere. The best mid-point between these two approaches is found on Wouldn’t Leave, with syrupy piano playing under West’s lyrics that address his ill-advised slavery comments. PARTYNEXTDOOR, Jeremih and Ty Dolla $ign are in their element, and although the verses are sometimes clumsy (“You know I’m sensitive, I got a gentle mental”) it is still an endearing highlight of the album.

West’s political outbursts of April and May are a lingering presence on Ye, which was created in the middle of an almighty backlash against him. He refers back to them on several tracks, but only in a flippant way that suggests an odd level of detachment from his own views. On I Thought About Killing You the line “sorry, but I chose not to be no slave” has been removed from the standard version and replaced with nothing, leaving a deeply ambivalent blank space in his verse. Yikes, meanwhile, suggests that he was just trolling in an impassive cadence lifted from Juvenile’s New Orleans classic Ha.

The production continues the melting pot approach of his recent releases, with the soulful No Mistakes sounding a lot like Bound 2 II and Violent Crimes’ lush chords showing the gospel influence that ran through The Life Of Pablo. In fact the whole conceit of Violent Crimes is not unfamiliar; West mused on the same situation in Late Registration’s We Major, and along with the Wolves-esque chorus of Yikes it creates the impression that the self-proclaimed genius is running out of ideas.

In this period, West has been collaborating with young artists that were inspired by his earlier work, and because of this there are many points in Ye where the main artist is not the star of his own show. His verses mostly feel redundant, hastily thrown together to validate the presence of these songs on his project, and while the album has been described as introspective this very brief release only allows for skindeep thoughts on any one topic. The Kanye West show has already rolled on, but some of the magic of yesteryear has been left behind.