Karen Elson – The Ghost Who Walks

by Michael Cragg
published: 24 May 2010 in Album Reviews
Tweet 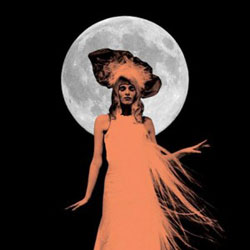 It’s easy to be cynical about the move into music made by supermodel Karen Elson. Her husband is a certain Jack White, who produces and plays drums on The Ghost Who Walks, her debut album. The guitarist son of Patti Smith is in her band. And the album is being released through XL Recordings, a label not known for their fondness for polite country rock.

But cynicism aside, there is much to enjoy about The Ghost Who Walks, the title of which refers to a nickname Elson endured at school in Oldham. Unlike her fellow models-turned-singers, Elson can actually sing, albeit in a slightly affected American lilt. She infuses the gorgeous title track with a sinister yearning, whilst the fragile The Last Laugh recalls the haunted country twang of Loretta Lynn.

For the most part, the album reeks of her adopted home of Nashville, with oodles of slide guitar and old American folk. Through it all Elson plays the part of the Southern belle with deft aplomb. But it sounds like she’s doing just that; playing a role. The lyrics over accentuate the eerie, gothic damsel represented by the album artwork to almost cringe-worthy levels, with every clich� represented; tears cry blood red, the wind is wild, the roses thorny, the summer cruel, &C.

You can’t shake the feeling that all these endless cliches could have been replaced with genuinely odd tales about Elson’s fairly extraordinary life. There aren’t many people who have experienced the journey from gangly oddball in Oldham to wife of a rock superstar living in Nashville, via the alien world of fashion. If there are experiences to be found in the lyrics, too many of them are coccooned in obvious gothic imagery.

It’s when she steps further outside the genre lines that things get slightly more interesting. 100 Years From Now reflects her former guise as a member of the political cabaret troupe The Citizens Band, whilst the title track features sudden bursts of bluesy guitars that could, obviously, have featured on any White Stripes album.

The Ghost Who Walks is by no means a poor album. There are lovely moments littered throughout and for the most part Elson is a convincing performer. Having said that, it’s not an album that lives on in the memory, and the feeling that you’ve heard much of it before is hard to shake.