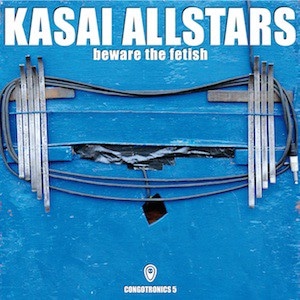 Crammed Discs’ Congotronics series has proved to be a wide-reaching and influential project, branching out well beyond niche ‘world’ music audiences, at least in part through the Congotronics vs. Rockers tour (featuring the likes of Juana Molina, Deerhoof and Animal Collective alongside Congotronics artists such as Konono No. 1).

Beware The Fetish is the second album from the 15-strong musical collective (joined here by an additional 24 guests) known as Kasai Allstars and it may well represent the apotheosis of this enterprise. At two discs and over 100 minutes, it is an admirably risky and uncompromising release. It bravely goes against the grain of playlist culture, with the sleevenotes dictating that the music demands ‘total immersion’ and that it should not be consumed as ‘background music’.

It is, of course, quite hard to imagine anyone using this powerful, agitating, relentlessly grooving music as a soundtrack to a dinner party. Yet much of it is functional. The opening piece is sung at the enthronement of a chief, whilst He Who Makes Bush Fires For Others appears to be a gentle swipe at acts of altruism, and is said to be suitable for all occasions. This is one of the strange aspects of consuming this music in the west – here, it can only be divested of its cultural and ritual experience, and its primary intended audience can enjoy it for its sonic imagination and storytelling vitality.

Vincent Kenis’ production here is remarkable for its clarity and distance – his recording style is sonic documentary – capturing the band as they sound without adding needless flourishes or tricks. Yet this is not to say that the music is without detail. In fact, it is the tiny nuances that make it such a compelling experience – the foregrounding and then backgrounding of vocals, the repetitive guitar parts that often underpin the groove (Mopero Mupemba may be the group’s defining musician) whilst percussive lines intertwine, overlay and sometimes subsume them.

For all the emphasis on the Allstars’ provocative, uncompromising side, it would be easy to ignore the underlying sense of melody that often breaks through. This is perhaps most notable on He Who Makes Bush Fires For Others, where the guitar lines tumble and cascade and where the vocal responses are arranged in striking, imposing harmony. It seems to gradually, imperceptibly build throughout the track’s 11 minutes so that, by its conclusion, it has reached a hypnotic peak of intensity. The title track seems to share some qualities with pioneering psychedelia. Even when the music is stripped back to its rhythmic fundamentals, as on As They Walked Into A Forest On A Sunday, They Encountered Apes Dressed As Humans (the titles remain extraordinary), the music retains an entrancing quality. Here, texture and colour are provided by delicate flickers of likembe and the vocal contributions of Orchestre Tandjolo, and the music is kicked into a new gear by thunderous hand drums.

The music is breathlessly confident and strident – even Thus Spoke The Ancestors, which purports to offer a parable for the problems experienced within marriages, sounds like a clarion call and a celebration. The album concludes with The Ploughman, a recording from the Congotronics vs. Rockers tour that features members of Wildbirds & Peacedrums and Deerhoof. It’s breathtaking, but possibly feels a little out of place on this set, which otherwise seems to be an extensive and almost overwhelming document of this music’s undiluted power. The introduction of a distorted power chord riff suddenly feels needlessly conventional.