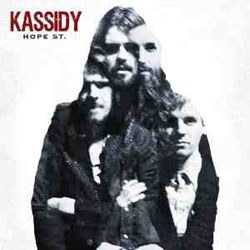 It’s a fearless band that name themselves after the most renowned American Western of all time, but you can’t help but wonder if The Brady Bunch might not have been more apt a name for Scottish folk-rockers Kassidy. Hard as it might be to believe, the Glasgow four – Lewis Andrew, Barrie James O’Neill, Hamish Fingland and Chris Potter – not only work, rest and play together, they also live under the same roof. And if you’re wondering whether or not such a set up is conducive to a new band in its infancy, their debut album Hope St might very well convince you.

Named after a street in Glasgow where Lewis and Hamish actually worked – handing out free newspapers – the new album title is said to metaphorically represent the journey each of the band members has undertaken to get to where they now are and intend to continue, that is making music for a living.

They might be new to the album charts but the band have already cultivated quite a following as a result of their performances on the festival circuit last year, especially at Latitude where their no-nonsense approach to acoustic folk-rock won them a sizeable crowd.

Pigeon-holed (something they don’t seem to mind) as a ‘grittier’ and ‘rockier’ version of Fleet Foxes, their overall sound sits more comfortably between mid 1980s bands Deacon Blue and The Lemonheads. In interviews the four talk of their need to keep it acoustic in order to hear each and every note played, and their vocals are indicative of this as their overarching harmonies in I Don’t Know and Oh My God put the likes of US counterparts such as The Magic Numbers to shame.

The arrangement on the title track mixes their folk roots with more contemporary rock, while The Betrayal is indicative of mutual musical influences including Muddy Waters, Free and Lynyrd Skynyrd. That Old Song sees the band try their hand at traditional country while La Revenge has all the likeability of a Deacon Blue classic cushioned in Wet, Wet, Wet harmonies. So far, so unlike Fleet Foxes then.

Waking Up Sideways is the highlight of the album. An accomplished track that leaves little or no room for vocal weakness, it could just as easily have been written for Chris Martin. It builds like a conventional rock ballad and best illustrates the band’s ability to fuse their musical skills together their song writing talent.

All too often new and unplugged bands make a name for themselves based on their live performance and ability to interact with a crowd. In this case however, Kassidy have proved they’re as serious about recording as they are performing and if their debut album is any indication, they’re in it for the long haul.