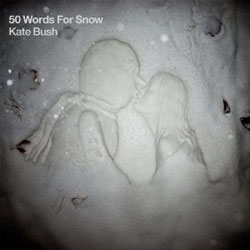 Usually hell has the chance to freeze over a couple of times between Kate Bush albums; but in 2011 the unthinkable has happened. It appears that revisiting her own material for Director’s Cut fuelled a creative renaissance; and, hotter on its heels than anyone could have imagined, the world has a New Kate Bush Album to savour, the second in a year.

Like all of her most significant work, it reinvents her as an artist, yet is utterly, distinctively her voice. Thematically it’s consistent with her past output, exploring the beauty of nature, exotic and unsettling trysts, exhaustive lists and gentle beasts; without a carelessly chosen or predictable word or note in sight.

It’s no coincidence that 50 Words For Snow hits the shelves as we approach the shortest day of the year, for it represents Kate Bush’s first major foray into glacial minimalism. Its opening three tracks gently unfold over 35 long minutes, contain almost as much silence as sound, and revolve around simple, repeated piano motifs. Gone are the rich vocal swoops of old; here her vocals (often shared with boy sopranos) revolve around short, brittle phrases delivered in tones that are closer to Tudor chamber music or medieval plainsong than contemporary pop.

This was only hinted at in Prelude/Prologue, the opening tracks from Disc 2 of 2005’s Aerial. But where Aerial is all birdsong, late-summer dreaminess and honey-coloured production, 50 Words For Snow is chilly, stark, fragile and wintery throughout. Images are drawn exclusively from the natural world in midwinter: opener Snowflake is like the Kate Bush / Peter Gabriel collaboration reinvented by Philip Glass; Lake Tahoe is an equally delicate tale of a Victorian ghost rising from the depths of freezing water; Misty an eroticized fantasy of a fleeting affair between a girl and snowman.

Bush’s musical palette is equally constrained: her piano is always at the fore, with mere hints of guitars and percussion lying deep in the mix. All of this makes for an intense, intimate and sometimes claustrophobic listening experience: it’s difficult to imagine doing anything else but actively attending to this music when it’s playing.

The album’s second half thaws the frostiness somewhat. Wild Man tracks the footprints of the Yeti, in a lyrical landscape knee-deep in Himalayan imagery. On any other album, its length and complexity would make it the meditative closing track; here, it’s the single – on the basis that it has a chorus and a hook or two.

One would scarcely expect such a stately, monochromatic album to feature guest stars, but Elton John and Stephen Fry are amongst the notables on show here. In truth, Fry couldn’t have been better cast: listing 50 arcane terms for snow for the title track and clearly savouring each word as if it were a different flavour of ice-cream: “Wenceslasaire… faloop’njoompoola… spangladasha… boomerangablanca.” Less successful is Sir Elton, whose bombastic contribution to Snowed In At Wheeler Street is could have been lifted straight from The Lion King soundtrack; his soupy vowels and glutinous croon turning the ice and snow of the libretto into lyrical mush.

But this is a temporary blip in an otherwise excellent album. For its glacial pace, tight vision, long running time and extreme track length (seven tracks in 65 minutes) it’s a surprisingly accessible work. It’s absorbing and enchanting without having to resort to formulaic song structures, pop thrills or radio-friendly catchiness. Welcome to this season’s Kate Bush: wrap up warm now.