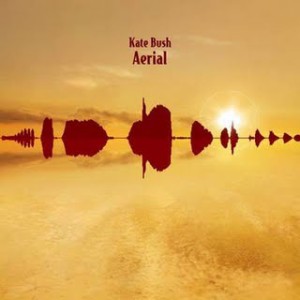 There aren’t many artists who could get away with a 12 year break and come back from semi-retirement with an album that has grown men quivering with anticipation. Aeriel is undoubtedly an ‘event’, partly due to EMI’s now compulsory security measures surrounding the release, but also because Bush’s absence has only meant that our hearts have grown even fonder of her.

Aerial comes to us in two parts, and it’s clear that this isn’t an album to listen to on ‘shuffle’ on the iPod. The first disc, subtitled A Sea Of Honey, contains seven songs of an intensely personal nature, covering subjects such as her mother’s death, the domestic routine of having a family, and, erm, mathematical formulae. The second disc, A Sky Of Honey, is that old fashioned beast – a concept album.

There are few people who could pull off a concept album, but as anyone who’s heard the wonderful The Ninth Wave from Hounds Of Love will testify, Bush is one of the few who can. The conceptual piece follows a day’s progress from the afternoon, through dusk and nighttime, onto sunrise. It also features Rolf Harris reprising his guest appearance on The Dreaming – all as per usual in the world of La Bush then.

Of the two discs, the A Sea Of Honey is the most accessible, but A Sky Of Honey is the more rewarding. The latter is designed to be listened to in one blissful sitting, allowing 41 minutes of beautifully atmospheric music to captivate you. The former is more conventional, although whether anything Kate Bush produces could accurately be described as conventional is a moot point.

The single King Of The Mountain opens the album, and it feels like an old friend coming home. There’s a slight reggae lilt to the song, which mentions Elvis Presley and evokes Citizen Kane. It appears to be about the empty lives led by celebrities (“why does a multi-millionaire fill up his home with priceless junk” asks one line), and Bush’s voice sounds as good as ever. It’s a marvellous introduction to a complex, challenging album.

Another highlight is Pi, which features Bush reciting the mathematical formula to 112 decimal places, and the almost poppy How To Be Invisible (and how much will that title by analysed by the Kate obsessives?). The declaration of love to her son, Bertie, despite some rather queasy lyrics, is nicely touching and sounds rather like a medieval waltz. She saves the best till last though with A Coral Room, a starkly beautiful tribute to her late mother, which sounds a distant relation to the heartbreaking A Woman’s Work.

The second disc is quite simply a thing of beauty. It would be unfair to pick out any particular track, although the jazzy stylings of Sunset are particularly nice, and Bush manages to express her wonderment of nature just perfectly in Somewhere In Between: “We went to the top of the highest hill, and stopped still/It was so beautiful”.

She even manages to get away with sequencing some bird songs and arranging them into a rather lovely tune on Aeriel Tal, although the less said about Rolf Harris’ mercifully brief attempt at singing on The Painter’s Link the better. Generally though, from the opening coos of the owl on Prelude right through to the dramatic rhythms of the excellent title track, this is Kate Bush at her very best.

Like all ambitious double albums, Aeriel is not without its flaws, but even Bush’s moments of failure are much more interesting than those of her contemporaries. And when Aeriel works, which it does for the vast majority of the album, it sounds sweeter and more beautiful than anything else on earth. Let’s just hope it doesn’t take her another 12 years to make the next one.