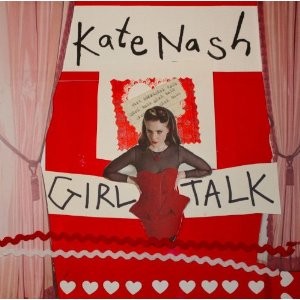 Last year, Kate Nash released a new single, Under-Estimate The Girl, via the internet. A sprawling, snarling mess of a song written and recorded in less than 24 hours, it was perhaps one of the most confrontational pieces of music ever released by a hitherto mainstream artist.

Under-Estimate The Girl isn’t included on Nash’s third album, Girl Talk. Nor is anything quite as aggressive or unhinged. Despite this, Girl Talk succeeds in continuing the job started by last year’s single in putting clear blue water between the Nash of old – the jovial 20-year-old who hit Number 2 with her second single Foundations in 2007 – and the new Nash: someone who’s more likely to sing about female castration than boy trouble.

Of course, it’s not unusual for musicians to change the sounds they work with. And there’s nothing to suggest that Nash isn’t sincere in her intentions. It turns out that the problem with Girl Talk isn’t that it’s conceptually flawed or overly calculated. Girl Talk’s main problem is that its songs are not, on the whole, any good.

Girl Talk comprises 15 tracks of purposefully scrappy, under-polished indie rock that recalls The Breeders and Veruca Salt at its lightest, and L7 and Hole at its heaviest. Good bands, all; moreover, there’s no reason why Nash’s playful vocal delivery and observational, slice-of-life lyrics wouldn’t be a good match for an album of brisk, bratty rock music.

Indeed, there are occasions on Girl Talk when we get glimpses of what another, better Kate Nash indie rock album would have sounded like. Conventional Girl is atypical in that it actually resembles a fully-realised song, as opposed to a bunch of half-formed melodic ideas thrown together in the hope that the novelty of hearing Nash screaming her vocals through a distorted microphone would be enough to see them through.

Elsewhere, OHMYGOD! benefits from a chorus that feels like it’s been beamed in from another, more tuneful place – Nash’s first album, perhaps. Cherry Pickin’, meanwhile, is the best thing here: a straightforward rocker that’s blessed with a memorable chorus and which is also unburdened by having to peddle a lyrical agenda (more of which later).

Unfortunately, moments such as these are the exception, not the rule, on Girl Talk. Death Proof builds up a nicely noir-ish, surf-rocking atmosphere reminiscent of The Raveonettes, but wastes it with a limp non-event of a chorus that sounds like a stopgap put in place before the proper one was written.

Are You There Sweetheart? begins similarly strongly, with its stalking bassline and icy guitars recalling Pixies; however, its repeated non sequitur lyric – “You were always watching my neck from the back of the room / But you never even cared” – proves a distraction from which the song never recovers. Worse is to come in the form of Oh, a song so formless, flat and tuneless that a sufficiently litigious listener could feasibly sue its creators under the Sale Of Goods Act for failure to take reasonable skill during the writing and recording process.

Nash has described Girl Talk as a “mission statement of what it’s like to be a woman”. That mission statement is most clearly delivered on the punky thrasher All Talk, during which Nash screams “I’m a feminist / And if that offends you / Then fuck you!” to its chauvinistic subject, and on Rap For Rejection, essentially a list of various scenarios – some professional, others personal – in which sexism continues to be writ large: “He asked you to undress … said you were dressed like a little slut… You’re trying to tell me that sexism doesn’t exist / Well if it doesn’t exist than what the fuck is this?”. The sentiments expressed in lines such as these are delivered sincerely and are undoubtedly addressing genuine real-world issues, but one wishes they weren’t said in such a clunky, on-the-nose manner.

In interviews, Nash comes across as likable, smart and passionate. Her youth project, the Rock ‘n’ Roll Girls After School Club, is highly laudable. In addition, her decision to move away from the cuddly, approachable pop of her debut album (especially when said move appears to have cost Nash her record contract) is brave. It’s just a shame, then, that Girl Talk is likely to appeal only to hardcore Nash fans.