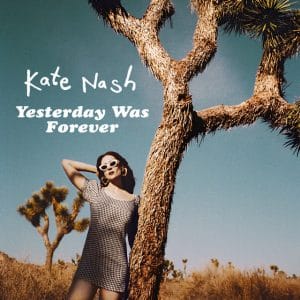 It was a much simpler time, back in the mid 2000s. Social media in particular had yet to morph into the data-stealing, election-influencing behemoth it’s now become. In fact, back in 2005 there were only really two social media websites to speak of: Friends Reunited, where you could laugh at the bleak gin-sodden lifestyle your old school bully had carved out for themselves, and MySpace which, mainly, was used to discover new music.

Arctic Monkeys, Lily Allen and Kate Nash all became known as ‘MySpace artists’. And while the Arctics moved from Hillsborough (via High Green) to the bright lights of the USA, and Lily releases the odd pop gem in-between fighting off some of the worst people in the world on Twitter, it’s Nash’s career that is arguably the most intriguing. Just over a decade ago, she released her debut album Made Of Bricks, and deftly created an anthem for a generation simply by rhyming ‘bitter’ with ‘fitter’.

Yet it soon became clear that she wasn’t content with simply producing whimsical piano pop sung in a Mockney accent – her next two albums My Best Friend Is You and Girl Talk flirted with Riot Grrl, spoken word and guttural vocal howls. Perhaps most surprisingly, she’s also returned to her first love of acting, with an extremely well-received role in Netflix’s series about female wrestling, Glow.

Despite the quality of her acting, Nash very much remains a musical going concern, and her fourth album Yesterday Was Forever feels like a huge return to form. For, while her previous two albums were always an interesting, lively listen, they were both a bit formless and sketchy. The problem when you’re constantly chasing a new sound is that you sometimes lose track of what made you great in the first place – and by adopting a more focused approach to this record, Nash has produced arguably her strongest album since her debut.

However, Yesterday Was Forever does prove that the cutesy piano anthems are a thing of the past. This album is more like Nash reconciling her pop sensibility with her love of more visceral rock, which works extremely well for the most part. Opening track Life In Pink has an immediate, easy charm which sounds immediately uplifting, despite the opening line of “I think about death all the time, do you think that’s morbid?”. There are nods to the likes of Best Coast and Wolf Alice, while those who enjoyed Liz Phair‘s more poppy direction will also find much to love.

Drink About You could well be the best thing Nash has written yet, a blissfully catchy tale of musing on a failed relationship with lyrics like “I think I hate yourself, I think I hate me even more” while Call Me is a similar slice of power-pop magic. Karaoke Kiss, meanwhile, is a surprising left-turn into electro-pop, swiping the introduction from Taylor Swift‘s Style before settling into a downbeat, deadpan, spoken-word gem with a chorus that almost swells out of the speakers.

It’s those little experimental moments that make Yesterday Was Forever such a constantly refreshing listen – the grungy Riot Grrl stylings of California Poppies, and the twisted, mashed-up backing vocals of “I really fucking hate you” on Hate You. Even better is the slinky, sweet soul of Body Heat (with the memorable chorus of “You make my dopamine levels go so crazy”) and the acoustic ode to anxiety that is Today (“Maybe today when I go out, it will feel different and I won’t be scared at all when a stranger sits too close to me, I won’t panic, I won’t feel my skin crawl”).

It’s not all perfect – at 14 tracks, the album feels a bit too long and My Little Alien and To The Music I Belong have “deluxe iTunes limited edition” status written all over them, and sometime Nash can sound like she’s slipping into self-parody, as on Take Away with its lyrics about watching Buffy The Vampire Slayer and enjoying a Chinese takeaway.

However, it’s a pleasure to hear Nash back on form and really enjoying her music. Self-released and completely funded by fan contributions, it’s inevitable that Nash’s hardcore fan base will enjoy this album most of all. However, for those people who thought that Kate Nash may have been a casualty of being spat out and thrown aside by the music industry, Yesterday Was Forever provides plenty of evidence that she can still hit top form when she wants to.