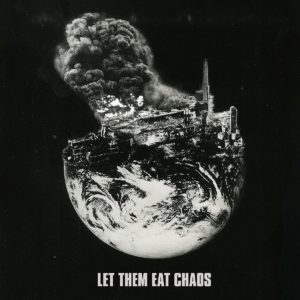 Since Kate Tempest’s last record – 2014’s Mercury-nominated Everybody Down – she found the time to put out Hold Your Own, her finest collection of poetry yet, and her debut novel The Bricks That Built The Houses. It’s one of life’s mysteries that this polymath can produce work at breakneck speed across multiple disciplines like poetry, prose, plays and hip hop records and rarely, if ever, strike a bum note. And it’s a gift to the record buying public (if such a thing exists anymore?) that she has found the time to conjure this latest offering, as it offers timely commentary on an increasingly tumultuous world.

Let Them Eat Chaos feels immediately darker than its predecessor. The cover alone more than hints at the apocalyptic tone of the record with its depiction of the Earth devastated by violent industry. And whilst Everybody Down was by no means a light a fluffy work, Tempest broadens the focus of her highly articulate and analytical eye and the result is starker as her concerns reach critical level.

In the intervening period between her records the UK has had a general election and a referendum on its membership of the European Union. The outcomes were the result of democratic process, but that’s not to say that a large portion of the electorate weren’t left devastated by the respective results. Listening to Europe Is Lost there is little doubt that Tempest falls within the latter group. With astonishing clarity of thought she has created a powerful protest song the likes of which we are rarely produced these days. The song begins by recounting the semi-conscious blinkered way we all conduct our lives on a daily basis, as she wearily raps, “People are dead in their lifetimes/Dazed in the shine of the streets/But look how the traffic keeps moving/The system’s too slick to stop working/Business is good.”

The track builds and is dense with all kinds of contemporary horrors including environmental disaster, “The water levels rising! The water levels rising!/The animals, the polar bears, the elephants are dying!/Stop crying. Start buying/But what about the oil spill?/Shh. No one likes a party pooping spoil sport”: to immigration, “But they’re only coming over here to get rich/It’s a sickness/England! England!/Patriotism!”: to glaring double standards and inequality between those with power and those without, “Caught sniffing lines off a prostitute’s prosthetic tits/And it’s back to the House of Lords with slapped wrists/They abduct kids and fuck the heads of dead pigs/But him in a hoodie with a couple of spliffs/Jail him, he’s the criminal.” In lesser hands the breadth of ground she covers in one track could result in a muddled effort, but not here. Tempest yields her talent brutally, yet eloquently, to hold all to account, “Here in the land where nobody gives a fuck.”

Musically, on Europe Is Lost, and like most of the tracks on the album, the theme is low key. Moody, economic beats are paired with subtle, yet infectious synth lines that frame and give atmosphere to her tales, never imposing themselves on the most important part of the record; Tempest’s rhymes. Everybody Down had a number of hook heavy dance tracks like the Beigeness and Lonely Daze, and that’s not to say her latest isn’t without the fun stuff either. Whoops is such a track, fit for the clubs, propelled by a restless bouncy beat and a call out chorus. It’s also a great example of Tempest’s ability to flit seamlessly between omniscient narrator and first person narrative.

Whoops finds her as a character failing miserably at knocking drugs on the head, and nothing but an off the cuff “Whoops” to explain that they’re “double dropping again”. Its lightheartedness belies the problem of self-medication that Tempest returns to again and again. Ketamine For Breakfast similarly deals with the relentless pull of drug addiction, and in relation to the themes visited on track like Europe Is Lost is it any wonder that with drugs, or otherwise, we try to numb ourselves?

But this is Tempest clarion call for everybody to wake up, and she demands it most loudly on the album closer Tunnel Vision. Wha-wha synths and a simple beat soundtrack her call for us all to “love more” to let go of parochial attitudes to environment, immigrants and our own lower classes that are demonised as lazy scroungers. But most importantly it asks for us all to take responsibility for the ills of the world and not to turn a blind eye reminding us, “It was our bombs that started this war and now it rages far away so we dismiss all its victims as strangers” and that “It was our fucking banks that got bailed.”

It’s one of the few times on the record that she sounds angry, spitting each lyric ferociously. For the most part she doesn’t need to speak these words in angry tones because her message is deafening, but here her feeling spills out. Let Them Eat Chaos’s hard truths are even more powerful for it. It’s a vital record that’s a blast of clarity in a muddy, chaotic world.