Kate Tempest – The Book Of Traps And Lessons 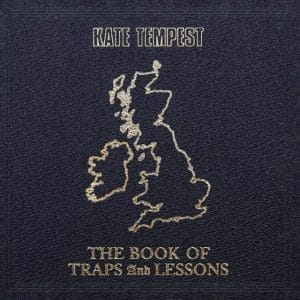 The comparison isn’t often made but in many ways two-time Mercury nominee Kate Tempest, with her focus on concept, narrative and shifting perspectives, is the UK’s answer to Kendrick Lamar. And just as To Pimp A Butterfly was followed by DAMN., the Brockley native’s critically acclaimed grand story Let Them Eat Chaos is followed by The Book Of Traps And Lessons – a series of vignettes.

“The tracks comprise a narrative thread and are intended to be listened to in one sitting,” says the third studio album’s press release, and they variously address notions of love, societal injustice, religion, and the struggle to achieve lasting happiness in a world that engineers restlessness. Much like DAMN. they are approached from contrasting angles across the album.

I Trap You, with its hackneyed waltz loop and repressive ideas of monogamy, could be seen as a flip-side to Firesmoke’s smitten verses about a relationship where everything’s going right. “I wrote it for my woman,” Tempest explains, “inspired by her and everything that falling in love with her has taught me.” Likewise, one person’s contentment with what they’ve got (depicted in Hold Your Own) is another’s stifling routine (as in Three Sided Coin).

This notion of balance works well in the above examples, but when it polarises further it becomes reductive. All Humans Too Late gets sanctimonious about the problems of the world today, while its counterweight, closing track People’s Faces, comes across a bit Eat Pray Love with its dewy-eyed sentimentality. The truth lies somewhere in the middle, which Tempest is hinting at by featuring both tracks on the same record, but for that reason the extremes grate.

The production, with Tempest and longtime collaborator Dan Carey this time working with legendary US producer Rick Rubin, is moody and effective throughout, providing ominous piano and cello to Brown Eyed Man, muffled laser zaps to Holy Elixir and low-key organ chords to Hold Your Own. In this regard it’s an improvement from Let Them Eat Chaos, which was sometimes weakened by its accompaniment.

Overall The Book Of Traps And Lessons is best with a healthy dose of thoughtfulness and nuance, and while it falters on the occasions when these are disregarded, this album is another example of why Tempest’s spoken-word works now routinely amplify well beyond her poetic beginnings.