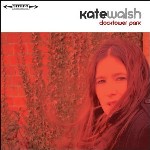 This is the first album from a precocious talent, 20-year-old Kate Walsh. Possessing a gorgeous, breathy voice, she also shares songwriting credits with producer Lee Russell, who has come up with subtle string and guitar arrangements to match, providing an autumnal backdrop. Apparently Clocktower Park is a meeting place in Walsh’s hometown of Burnham, Essex, around which many of the songs are based.

Walsh is clearly influenced by peers such as Joni Mitchell and Tori Amos, and to some extent resembles the Beth Hirsch of Early Days. However a voice like Walsh’s brings individuality, and although she sometimes gets too close to the mic for comfort, these songs are clearly from the heart.

The opener recalls Lene Marlin both musically and lyrically, with its “seems like I’m losing all the time”, but by the chorus there’s a more defiant “it’s never over”. To sample the purity of this girl’s voice, Star and Same Old are both torch songs that stress a certain vulnerability, whilst intelligent use of Ed Harper’s cello brings some depth to Impressionable.

The icy cool of Sullen is well caught by Russell, who clearly knows a thing or two about Nellee Hooper-style orchestrations, although once or twice I found the strings were laid on too thick. The subtle electronic touches work well too, especially on the filtered beat box sound that opens Quicksand. In the same song Walsh curiously refers to a “caramel illusion” – presumably she’s a chocaholic! – while amongst the moody photos in the booklet is an amusing picture of Miss East Anglia, tongue firmly in dimpled cheek.

It’s good to see a sense of humour in evidence, although my only real complaint about this album is that it would have benefited from a little more. It makes for a good start to her career though, and should satisfy particularly if the names mentioned above are your favourite things.