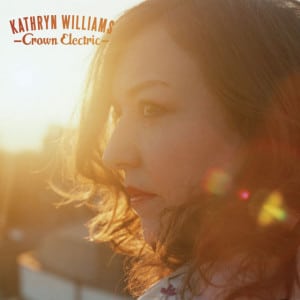 Before Elvis Presley was crowned the King of Rock N Roll and basically changed the music world forever, he worked as a truck driver and delivery man for a company called Crown Electric. It’s that company which gives Kathryn Williams‘ 10th album its title, and although it’s unlikely to eventually power her to Presley-style success, her most accessible album yet should win her a fair proportion of new fans.

So often dismissed as a ‘folkie’, with all the niche interest that implies, Williams in fact sounds nothing less than a contemporary singer/songwriter, and it’s a sound that’s been refined and perfected on Crown Electric. There isn’t a track that wouldn’t sound out of place on the radio – without turning overtly poppy or dumbing down, it typifies the kind of quiet, pretty songs she’s specialised in since 1999.

As ever, beneath the beauty of Williams’ melodies lies a darkness. Opening track Underground skips along irresistibly, but concerns the mundane existence of commuters – “I see the same people on the train, I don’t say hello, I don’t even wave” muses Williams, before deciding “I don’t want to live like this till I’m underground”. As with her best work, it’s like having your hair stroked before being punched in the gut.

There’s certainly an existential theme running through Crown Electric, with several songs concerning the passing of time – as Count explicitly states “I’ve got to make these hours count, these seconds count”. It’s a subject revisited in the gentle jazz swing of OUt Of Time, with the heart-rendering line “when you’re supposed to know you’re in your prime, until it’s behind you”, while the gently lilting Monday Morning is a plea to stop wishing the days away.

Williams’ long-term producer Neill MacColl sprinkles his usual magic on the album, with the lovely, string-accompanied Heart Shaped Stone already sounding like a hit in waiting, and the second half of the record sees a couple of collaborations with Ed Harcourt which give Williams’ music an added depth. The swirling torch ballad Darkness Rises is probably the best of these, but Sequins (apparently written by Williams in Harcourt’s bath) is a definite highlight, if only for the line “If I walked the afterlife with no make-up on, I’d  be frightening the angels for good”.

It’s little lyrical gems like that which make Crown Electric such a joy to listen to. The title track cleverly compares the life of tragic icons like Presley, Michael Jackson and Whitney Houston to the travails of the ordinary singer/songwriter (“well, stones can feel just as heavy as gold”) while Tequila contains probably the album’s key line, “Be brave enough to be yourself”.

It’s been Williams’ ability to be herself that’s let her quietly grow into being an immensely talented songwriter. Crown Electric is not so much a case of ‘if it ain’t broke don’t fix it’ but rather ‘it ain’t broke, but let’s make it even better’.