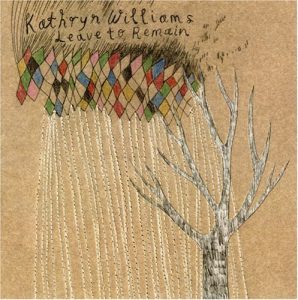 Williams hails from Liverpool but is based in Newcastle, loves Leonard Cohen and hates big record companies. Leave To Remain is her sixth, and probably her best, album so far. At 34 minutes it’s a short affair. Her songs are mostly tales, with a narrative of a beginning, middle and end, just as the folk tradition she ducks in and out of dictates. The best tracks are marked by the loving touch of a born tunesmith, while she doesn’t dilly-dally with what she has to say.

Sandy L is the tale of a webcam girl who strips from her bedroom. The track is wonderfully enhanced by the contribution of Keith Morris on bass clarinet, while Stevie is a paean to the late poet Stevie Smith. Both of these are sung with a tortured sadness, but it is when subject matter turns to love and loss that Williams is at her most beautifully poetic.

The opening line to Sustain Pedal is extraordinary: “Your breath from a kiss went down my throat/I felt how you breathed into the world”, while I challenge anyone to listen to Glass Bottom Boat, the album’s most remarkable track, and not fall in love with Kathryn Williams. Especially when she writes lyrics like: “We’ve been fucking all afternoon/Burning like fossil fuel/I feel like you’ve turned me into a glass bottomed boat/You see everything I hide but still keep me afloat.”

The album benefits from a production, by Williams herself and Darius Kendros, that explores how string arrangements and the odd electronic ambient touch complements Williams’ most dulcet and lovely voice. To their credit, these additions to Williams’ songwriting are measured enough as to not interfere with the softness of her vocals.

Leave To Remain is not immediately accessible and requires a good deal of listening to fully get to grips with it – again something that marks her apart from people like Joan Baez and aligns her with Laura Nyro, another figure she is likened to in critical circles. Her melodies are meandering and sometimes confused and the listener needs to work to follow them. It’s a worthwhile quest, mind you, as at the end of that road is a splendid album. If a bit bloody miserable.