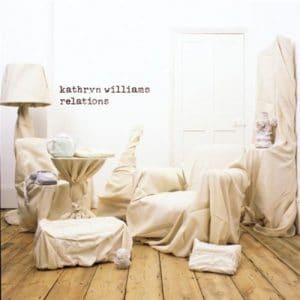 Kathryn Williams has long been touted as one of the leading lights of the folk scene. The Liverpudlian singer garnered some ecstatic critical notices, and a Mercury Music Prize nomination, for her Little Black Numbers album and has built an admirable reputation for her lo-fi sound and self-financed albums.

Old Low Light, the follow up to Little Black Numbers, was a dark affair and it seems it took its toll on Williams. In the excellent sleevenotes that accompany Relations, she explains she undertook an album of cover versions to enable her to “fall in love with music again”. Cover albums are risky affairs, but these songs are obviously close to Williams’ heart – she admits to being excited at the thought that people hearing these songs for the first time will seek out the originals.

Williams’ love for her material shines through on Relations. Whether it be the The Bee Gees, Pavement or The Velvet Underground that she’s covering, each song is played absolutely beautifully. The spare backing from Williams’ band is perfectly suited to the album as well – with Laura Reid’s cello playing being particularly effective.

The opening track, In A Broken Dream, is a case in point. It’s one of those songs that you probably don’t realise you know until you hear it, and Williams makes it her own. The plucked acoustic guitar accompanied by Reid’s cello gives the song a haunting quality – Williams’ hushed vocals only add to the track’s poignancy.

As ever with cover albums, some tracks work better than others. All Apologies, for instance, suffers from being so closely associated with Nirvana. Williams’ rendition just sounds far too happy and upbeat, especially when compared with Kurt Cobain’s definitive Unplugged In New York version.

That’s about the only time the album’s quality slips though. Thirteen, originally by Big Star, is just breathtaking, and Roger McGuinn‘s The Ballad Of Easy Rider is turned inside out by Williams to great effect. Moreover, she also tackles Leonard Cohen‘s classic Hallelujah. This has been covered in recent years by John Cale, Rufus Wainwright and, most memorably, Jeff Buckley. It’s a tribute to Williams that her version stands shoulder to shoulder with Buckley’s.

She saves the best to last though with the closing track of These Days, written by Jackson Browne. It’s a beautifully written song anyway, with its heart-rending lyrics of regret and loss, and Williams’ version is even more achingly beautiful. It’s the perfect end to a moving, quietly gorgeous record.

Relations won’t be to everyone’s taste – some may find Williams’ voice a bit too nuanced at times, and the stripped down, bare arrangements will charm some but leave others cold. If this album had the desired effect of making Williams fall in love with music again though, it’s likely it will have the same result on its listeners. Buy it and prepare to be seduced.