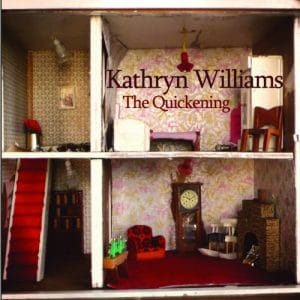 For all her distrust of big record companies, Kathryn Williams has taken the plunge and signed a new contract with (the admittedly independent) One Little Indian. Will this extend her fan base beyond a cult following of folkies and roots music fans? That remains to be seen, but The Quickening will certainly give her every chance of breaking out of her niche market.

Three years on from her last album, Leave To Remain, and little has changed in the musical world of Kathryn Williams. There is still the same intricately constructed folk pop songs and unabashedly honest lyrics, delivered in those trademark dulcet tones that sometimes mask the disturbing subject matter of the songs.

Recorded live to tape at Bryn Derwen Studio in North Wales, with Williams limiting her band to three takes per song, the result is one of the artist’s most immediate recordings in her stellar career. There is a sense of freedom here not heard since Williams’s early, self-released albums.

Album opener 50 White Lines is a case in point. Over a hypnotic backing Williams sings about life on the road while a male voice counts the white lines on the road. It’s eerie, catchy, and very different from anything Williams has recorded before.

Just A Feeling and Winter Is Sharp are more like the Williams we know and love. The former has a distinct Nick Drake feel to it, with delicately finger picked guitar and a hushed vocal intoning “what if love is just a feeling?”. The latter, meanwhile, reminds us of Williams’s status as a new folkie with its shanty like melody and the lilting vocal tones. It’s the kind of track you would expect to crop up on an Unthanks album.

Williams has always been one of the most contemporary sounding of the new folk brigade, and this is represented on the beautiful paean to love in the city that is Wanting & Waiting. Its polar opposite is represented on Just Leave, a stark portrayal of love falling apart with all the weight of words unspoken.

Williams has never truly nailed a complete album during her career, and The Quickening continues this tradition with a couple of less than stellar tracks. The jazzy overtones of Cream Of The Crop and There Are Keys fail to connect in the same manner as the other tracks, with the music an unwelcome diversion from the emotional honesty of the lyrics.

The remainder of the album glides along on Williams’s traditional folk pop sound, with Noble Guesses in particular standing out for the brilliance of its lyric. The poignant Up North brings the album to a close on a note of regret that chimes with the travel sickness of the opening track.

Kathryn Williams has never released a bad album and The Quickening is not going to disappoint her loyal fans. Will it appeal to a wider audience? That remains to be seen, but there is enough variety here. The immediacy of several tracks practically cries out for Radio 2 to do the decent thing and playlist one of this country’s most overlooked artists.