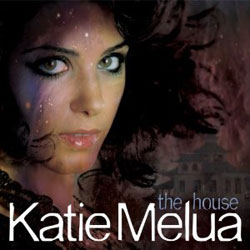 Some album reviews should be easy. Take, for example, the news that Katie Melua has a new release. Line up a few catty phrases about tortured vowels, nonsensical lyrics proclaimed as though infused with universal profundity, and Wombles songwriter Mike Batt is involved, and bish-bosh, there’s your one-star review. So it comes as a bit of a challenge, when on listening to the album, one has to sheath one’s claws and admit to quite liking it. It’s a relief that Mike Batt barely features.

For The House, Melua has teamed up with William Orbit, and while this might not be the rejuvenating, revitalising magic that he managed to weave with Madonna‘s career 13 years ago, he certainly manages to curb a fair few of Melua’s more tedious tendencies.

Opening track I’d Love To Kill You gets off to a promising start for the would-be assassin, relishing the possibilities of where Little Miss Bicycles In Beijing is going with the sentiment “I’d love to kill you with a kiss, I’d like to strike you down with bliss”. But as the song progresses, she develops the theme of conflicted emotion in love with pleasing imagery: “I’d love to open up your skin and wander there within.” And she achieves disturbing insight into a perhaps not uncommon feeling in relationships: “I love to watch you in your sleep, because you don’t have power over me, but when you’re awake I’m undone, in hell”.

The Flood is a soaring behemoth of a song, in which the arrangement and Melua’s disarming delivery make up for pat lyrical phrasing. A middle eight sees Melua’s first foray into dance, a direction that is suggested elsewhere on the album. A Happy Place simply needs a smart remix and it could make for a pretty decent dance tune.

Red Balloons is the song that should be the undoing of Melua and Orbit’s good work – a ballad based on the conceit that the sky is full of red balloons full of broken hearts. But in a masterstroke of lyricism and incredibly sensitive singing, with all the vowels left untortured, Melua manages to deliver a truly arresting love song.

Thankfully, it doesn’t go all their way. Tiny Alien sees Melua head into forced quirky territory that doesn’t quite work and sounds a lot like a lost track from Milla Jovovich‘s debut album – which perhaps reveals a common ex-Soviet tendency to excess cutsiness. And most fortunately, for anyone looking to point and laugh at Katie from the outset, God On Drums The Devil On Bass is an excruciatingly awful song. The One I Love Is Gone is sweet, but blues really is not really Melua’s forte, and much of the latter portion of the album is tedious filler.

Yet despite a few moments of middle-of-the-road excess, The House is a shockingly good album – that is, not actually amazingly good, but just shockingly by Katie Melua. There will be those who look for fault in everything, but large parts of The House go some way to make up for past crimes. Whether Katie can carry her audience with her as she attempts to cross into credibility, only time will tell.