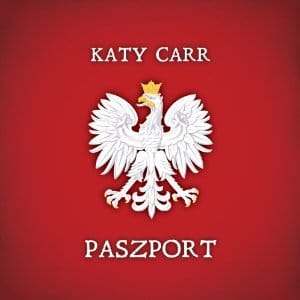 History is a difficult beast. It takes entire books to cover relatively short periods of time, and university libraries across the country offer many different versions of the same story. Few of these learned efforts ever really get across the intensity of experience of those they write about. Enter Katy Carr with her fourth album, Paszport.

Carr, whose mother is Polish, has written some fine Polish history with Paszport: not narrative or analytic, but living and breathing, pulsating history. After opening with a softly-spoken conversation between Carr and Auschwitz survivor Kazik Piechowski, Paszport launches straight into Kommander’s Car, a pulsing, cinematic song about Piechowski’s escape from his captivity in Auschwitz.

We learn from the liner notes that Piechowski and three other prisoners escaped, dressed in SS uniforms, using Rudolf Höss’s own Steyr 220 car to drive away. Accordingly, the song communicates the tension, the Polish cold, and the unbelievable resolve of these men, fleeing from Nazi persecution. Chromatic runs along the low end of a piano and the use of pizzicato violins are theatrical but finely judged. The song fulfils its purpose consummately: the subject matter seems increasingly compelling and incredible as the song goes on. Listen on loop and the scene appears in ever more detail before the imagination.

Kommander’s Car is actually a song from Carr’s previous album, 2009’s Coquette, but seems to have been the spark for the rest of the project. It seems glib to call Paszport a concept album, but that is what it is, amongst other things. It’s also a love letter to Poland and an elegy for the Polish dead of the war. Love, loss, and loss of love are some of the album’s prominent themes, present on Mała, Little Flower, Czarne Włosy, Zielone Ocsy (Black Hair, Green Eyes) and Red Red Rose among others. Mała, Little Flower is polka-inflected and almost comical at first, but develops into a dramatic rumble of cymbals and brass, before the protagonist’s resolve is reasserted by a return to a more simple, open texture. Red Red Rose sits well as a song alongside Kommander’s Car, as another chilly trip through wartime danger. Carr uses technology more explicitly here than at any other point, but subtly. Her voice echoes and stutters over shivering violins.

Carr’s sound is hard to pigeonhole, approximating classical music at certain points, and film music at others. Her music is rooted in folk most concretely, but often of the Polish rather than English kind. For all that, it’s remarkably accessible, as is the intellectual ambition behind the project. Carr has a beautiful and rather unique voice, at turns gentle and strident, and it’s a real shame that Paszport is almost certainly doomed to a small listening audience in today’s disinterested mass market. This album deserves not only to be engaged with as a serious piece of art music, but also heard as widely as possible. With a beautifully drawn and laid out booklet, inspired by the museums of Warsaw and London, Paszport is an album for music lovers, none of whom will be in the slightest disappointed with what’s on offer here.