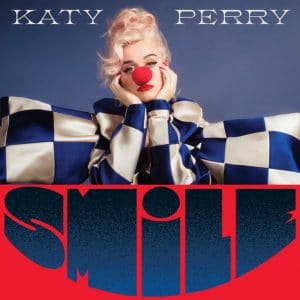 Katy Perry’s smile is back – that much is clear. After struggling with mental health issues, relationship breakdowns and a critically unsuccessful album, Perry bursts back onto the music scene following a three-year break, harking back to her previous beloved hits with infectious happiness in the lead-up to Smile that seemed designed to light up rooms everywhere.

Along with this nostalgia comes sparkly hooks, a solidly entertaining range of production and, at times, Perry’s euphorically emotive vocals. Creatively, it is definitely a return to form for the pop superstar. Unfortunately, there is a staggering lack of growth present in this album, surprising considering most of the foundation for Smile’s marketing was focused on Perry’s career rebirth, coinciding with the star’s impending motherhood.

Many of these tracks find the singer reflecting on her life and career. Frequent references to Witness, Perry’s underwhelming 2017 release, and the recurring theme of self-empowerment are threaded throughout. On Daisies, this thematic duo is particularly strong. The lead single is effervescent pop perfection, fizzing in all the right places, and is reminiscent of a less rose-tinted Teenage Dream. Yet although it feels appropriately expansive, and builds appropriately and appealingly, it also feels out of touch with 2020. Daisies could have been a lead single for Perry from her 2008 album One Of The Boys. To put it simply: it’s a bop we’ve heard from Perry before, even if it is no less catchy due to its familiarity, and it’s still a pleasant enough listen.

Resilient follows on the heels of Daisies, in every way. It is the childish, astonishingly repetitive younger sister to Daisies, so earnest in its emotional simplicity it makes you wish for Daisies’ hint of anger, soaring chorus and newfound sense of freedom. Resilient is upsetting for how much promise it shows – beginning with witty strings and fun lyrics that carry an undoubtedly positive message, with the chorus then falling into a repetitive by-the-numbers rabbit hole of sound, whilst Perry’s vocals lack any raw emotional substance; the bridge in particular falls flat, attempting power pop and coming off unfortunately cringey.

Lyrics throughout the album show that Smile works best when it leans into Perry as a tongue-in-cheek performer returning to her wickedly fun roots seen in lead single Smile, Not The End Of The World and Cry About It Later, where she drops the facade that her smile is always cartoonishly plastered on. In Smile, in between knife-sharp quips, Perry doesn’t seem to take her smile for granted – or too seriously – her voice lilting and almost comedic, working well with the clown branding for this album. Not The End Of The World follows suit lyrically, but with its euphoria chasing, action movie vibe it’s deliciously attractive, making it easy to ignore the re-done theme. A sure favourite for fans of Dark Horse, Perry leans into her talent at creating darkly bombastic tracks, rather than the more bubble-gum pop of Resilient, or the cheesy, gratuitous attitude of Champagne Problems later on in the album (a track which lacks both charm and style).

It is in Cry About It Later where Perry truly shines; flirting with danger and her gleefully calamitous – but human – habits, with lyrics that feel personal: “I think I’m ready to be someone’s new muse/I think I’m ready for a brand new tattoo/I’m gonna fake it until it makes me feel good.” Cry About It Later doubles down on an infectious electro-club beat, snappy layered vocals and a feel-good hook, making it a must-listen. Never Really Over is similarly electric, an electropop track produced by Zedd, with a tongue-twister chorus at odds with the ease with which a troublesome relationship can once again become enticing. Over a year after its release, it’s still an earworm – though perhaps best not listened to currently if socialising restrictions are making you think of a long-lost love.

Katy Perry is funny, vivacious, a little over the top in the best way, a powerful vocalist and so much more; she clearly now knows all of this, and her admirable confidence soars on this album. She has not made Smile to impress critics, but rather as an emotional catharsis, and in some tracks this catharsis does sparkle. But it would be great if, in her next creative venture, she focused less on just her smile, as wonderful as it is, and more on the complex emotions that make up the main draw of Smile.