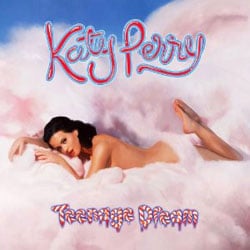 Katy Perry is very much a modern-day pop star. Her first global hit, I Kissed A Girl, was aimed at the tabloids. As well as hitting Number 1 in nearly every country, it also immediately created a shorthand reference that, rightly or wrongly, defined who she was and what she was about. Any thoughts of a one hit wonder were quashed with the brilliant follow-up, Hot N Cold, a song that felt less try-hard than its predecessor.

But she’s a pop star of this climate in more ways. Despite the two huge singles, sales of One Of The Boys failed to really ignite, especially in the US, where the album just scraped the Top 10. In a download culture where songs are less than a quid, Perry has so far failed to really establish herself as an albums artist.

Now comes Teenage Dream, her second album, and it’s clear from the outset that no risks have been taken with it. Dr Luke – the producer with the midas touch at the moment – handles production on half of the album; his love for simple, chunky guitar riffs and huge keyboard rushes are all over tracks like Last Friday Night (T. G. I. F) or the stomping The One That Got Away. But his production style is so precise as to be almost suffocating, trapping Perry’s (usually overwrought) vocals beneath a layer of production sheen.

Yet there are undeniable moments where it works perfectly. First single California Gurls is brilliant, brattish fun, Perry sounding sweet and coy on the verses before that huge chorus erupts, whilst the opening title track has a lovely vocal melody and some genuinely sweet lyrics: “You think I’m pretty without any make-up on / You think I’m funny when I tell the punchline wrong.” The Tricky Stewart-produced Circle The Drain is another highlight, with Perry sounding genuinely pissed off when she spits “Wanna be your lover / Not your fuckin’ mother” over spluttering synths and those brash guitars.

It’s an emotional vulnerability that’s sadly lacking elsewhere. Too often the lyrics resort to meaningless high school vocabulary or – as on the execrable Peacock (“let me see your peacock, cock, cock”) – endless innuendo. It’s the kind of disposable pop that leaves your head almost as soon as it’s over. It’s an album of singles placed in no significant order and with no particular thread. In a pop world dominated by the conceptualism of Lady Gaga or Rated R-era Rihanna, and the experimentation of acts like Robyn or Kelis, this is simply not enough.