kd lang and The Siss Boom Bang – Sing It Loud 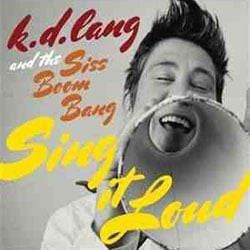 Hailed as the ‘best singer of her generation’ by sometime duet partner Tony Bennett, kd lang attracts a certain fanfare every time she releases new material. Yet particular excitement surrounds this album, for it’s the first made entirely with a full band of her own since two releases with The Reclines that launched her over 20 years ago.

Recorded in Nashville, largely live in the studio, there’s a palpable energy to these 10 tracks. The original plan had been to record three songs in eight days, yet they worked so quickly and well together that, in the blink of an eye, a full album was born. Musical director Joe Pisapia contributed the sighing, summery title track and co-wrote five other songs.

It will come as no surprise to fans to hear that the heart melting properties (whatever your sexual persuasion) of lang’s wondrous vocals remain intact. She has an innate way of swooping between notes, caressing a melody and instilling it with such yearning. Right from the piano openings of lead single I Confess through the dramatic opening dilemma of A Sleep With No Dreaming – “A hundred thousand reasons why I should walk away, a hundred thousand more make me stay” – she seduces.

Yet there’s a sense that these mid-tempo torch ballads have become so much her staple that they don’t stretch her enough. When she first fully realized her trademark sound on Ingenue, it was combined with such classic material. Whether anything on Sing It Loud will stand up like Constant Craving in years to come is doubtful. It’s hard to be critical, however, when every note is so immaculately performed and placed like exquisite brushes of paint on a sweeping canvas – with a particular nod to Joshua Grange on baritone guitar and dobro.

In addition to the original material, there’s a lilting, breathy cover of the Talking Heads song Heaven. Strangely, it retains a real sense of the original’s soul even though performed by a vocalist so different to David Byrne. Other highlights include the aforementioned title track, the sultry Perfect Word, and the electrified crunchier chords of Habit Of Mine.

It’s great to hear this timeless artist so relaxed and enjoying herself. Perhaps if she continues her collaborative relationship with The Siss Boom Bang, future recordings could be even more special.

kd lang and The Siss Boom Bang MP3s or CDs

kd lang and The Siss Boom Bang on Spotify