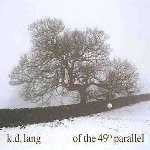 If ever there was a musical chameleon it’s kd lang. However, the Canadian chanteuse doesn’t do so to blend in but to stand out. And isn’t that the truth. Spanning 13 albums she has covered a range of genres from grass-roots country in Shadowlands, to emotional punchy pop in Ingenue, featuring her smash hit Constant Craving, and to classic covers such as Roy Orbison‘s Crying.

In fact, it was on a tour with Tony Bennett singing American classics that Alberta-born lang sprung upon the idea for her latest album, Hymns Of The 49th Parallel – a songbook for Canada in which her dark golden voice sweeps across soundscapes written by native song-writing greats Leonard Cohen, Neil Young, Ron Sexsmith, Bruce Cockburn, Jane Siberry and Joni Mitchell.

In honouring these profound artists the Los Angeles-based singer produces an emotional album that is as much a metaphorical home-coming as it is utterly devotional. The songs that have inspired the multi Grammy Award-winning artist become “hymns” as she pays homage to its authors and her country. It’s a rather self-indulgent adventure, sticking to artists who have sculpted her own personal development rather than including every Canadian artist who has made an impact in the music world.

In shining the torch for her homeland, lang has carefully chosen songs that are firmly ensconced in the collective conscience, such as Young’s After The Gold Rush while others are relatively obscure, like Joni Mitchell’s Jericho. Most are vintage, though in choosing Siberry’s The Valley (from 1989 album Bound By The Beauty) and Love Is Everything (from 1993’s When I Was A Boy), lang gives her songbook a contemporary edge.

And so through her visitations these songs, including her own song Simple, are given moving orchestrations, with gorgeous swooping string arrangements by Eumir Deodato and guitars by Ben Mink, who also produces this album. Elsewhere Cockburn’s One Day I Walk captures the organic dusty timbre of the song while Mitchell’s Case of You features a lonely piano played with all the solitude of a blue smoke-filled spotlight.

Add to that lang’s rich and thick voice singing with an underlying praise and each song gains a new resonance. Cohen’s Hallelujah she sings in a low tone and is easily the best rendition on this album. As her vocals soar so do the smooth violins and soft piano. It’s simply incredible and also tear-jerkingly moving. She adds gravitas with her rich voice in Young songs After The Gold Rush and Helpless, making the latter sound far from helpless but instead solid and strong. In contrast Cohen’s Bird On A Wire is given an uplifting and more light-hearted make over.

Interestingly there are no drums, with only a faint beat in Jericho. While this adds to the fluidity and timelessness of the music, the songs seem stuck in the same tempo, making it drag for me by mid-album.

However this is a work of great eminent stature. It stands tall and proud as it waves the Canadian flag while we listen in on lang’s patriotric selection of inspirational songs. Transporting her back to her roots and sung with beauty and simplicity, this album exemplifies that home is truly where the heart lies.