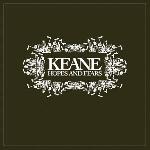 To say that Hopes And Fears is hotly-anticipated is to describe water as “moist”. In recent months we’ve all witnessed a number three debut single in the form of Somewhere Only We Know, the high-budget video for its follow-up Everybody’s Changing and a number of (pretty much justified) Coldplay comparisons. At long last then, we can put to rest our hopes and fears about Hopes And Fears.

Somewhere Only We Know, of course, sits at the head of the album, providing an ice-breaker of considerable strength. Indeed, it’s a swaggering Goliath of a tune, exhibiting a confidence and self-assurance rarely seen in full-length debuts. Bend And Break follows hot on its heels, and, as existing Keane enthusiasts will note, has inevitably been reworked from its original indie-label form. Whilst this may make essentially no difference to most people, the new sound is less subtle and slightly too polished. Thankfully, however, this change is far from being a deal-breaker.

As the album’s title suggests, the songs play along the lines of melancholia, imploring change and lamenting stagnancy in equal measures. Tom Chaplin, for all his posing on stage, is utterly sincere throughout, even painting tones of heartache across the otherwise unengaging On A Day Like Today (a track that stands out because of its relative anonymity).

Tim Rice-Oxley’s piano stylings range from Ben Folds on Can’t Stop Now to Chris Martin on Your Eyes Open, never leaning too heavily in one direction and ultimately providing the musical backbone over which Chaplin is allowed to sweep and soar. From a purely songwriting perspective, Sunshine is simply outstanding, featuring a fragile verse in neck-hair-tinglingly exciting juxtaposition with an uplifting chorus worthy of any band on the planet. The track is a tour de force live, and finds additional channels of expression in its album equivalent.

While slight over-production is a flaw I exaggerated as to contain my praise for Keane, there is a real problem in the omission of Allemande (a B-side from the now deleted This Is The Last Time single on Fierce Panda). The band themselves, however, admit that they intended to include the track, and that’s good enough for me. After all, with songs like We Might As Well Be Strangers and the beautiful She Has No Time, it’s not like they were struggling for material.

Finally, then, there is nothing much left to say, and, instead, a lot of listening to do: Hopes And Fears, as the optimists among us expected, is a fantastic debut, remaining both tender and confident throughout. It’s one of those albums where each track could be a single; the type you’ll listen to intently, and as the final tones of the epic Bedshaped fade into silence, the only thing you’ll feel is emotional satisfaction (and the desire to play it all again).